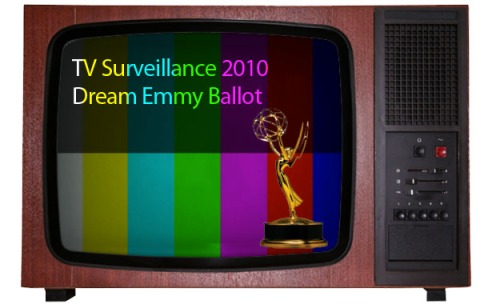 This week I’ll be pretending that I have an Emmy vote and discussing my picks for all the major categories. Once it gets closer to the time that nominees are actually announced, I’ll do an official “picks” column. Today: Supporting Actress in a Comedy Series!

Like all the supporting acting categories, this is a very tough one. But I tried — let’s do it.

After her overly dramatic work on Mad Men it was a little staggering to see Brie transition to the NBC comedy, but those feelings were quickly thrown to the side when I realized that she was awesome. Annie could have been a clichéd and even annoying character in the hands of a lesser performer, but Brie gave her life, made her the emotional center of the group and somehow made it okay for the internet to root for a sexual relationship between a thirtysomething and a 18- or 19-year old. Oh, and she was often damn funny.

The obvious winner and probably deservedly so. Jane Lynch is the superstar of Glee and even though the writers cannot decide how ridiculous or how human they want her to be on a week-to-week basis, the actress is always there to sell the material nevertheless. And even in the ridiculous moments, Lynch grounds Sue in a pompous, hyper-reality that isn’t quite legitimate, but still doesn’t go too far — at least in Glee standards.

Obviously, this was a terribly off-season for The Office and sometimes even Pam felt insufferable and loathsome in a way that I never thought was possible. However, Jenna Fischer was probably the best part of all the season’s only good episodes — “Niagara,” “Murder,” “The Delivery,” “The Lover” — and for the most part, kept me investing in the Jam relationship despite the poor writing. Also: she’s just so damn cute.

I’m naive to assume that the Emmy voters will bask in the improved glory of Parks and Recreation, but in my mind they should and should definitely nominate Aubrey Plaza. Her minimalist comedic performance is something to behold — especially when paired up with the similarly minimalist Nick Offerman — but most surprisingly, Plaza helped create an emotional anchor for the series with her wonderful romantic chemistry with Chris Pratt.

No one watches Party Down and so most folks haven’t seen the sarcastic, but heartfelt performance from Lizzy Caplan. That’s a shame. She doesn’t get to be overly funny all the time and oftentimes co-holds the straight person role with Adam Scott, but Caplan finds a way to be funny in moments in an always-funny series.

Strahovski is in an extremely odd position because she’s the most grounded, unfunny character amid a sea of goofballs and subtly funny characters on Chuck. However, she’s been able to handle the emotional content of Chuck very well, kicks a lot of ass and when asked to be funny or heaven for bid, smile — like in “Chuck Versus the Honeymooners” — Strahovski nails it. Sarah is a character that doesn’t lend itself to overt praise because she’s so stoic and in early episodes, almost blank, but Yvonne has breathed lots of life into her and thanks to excellent chemistry with Zachary Levi, helped make the Chuck-Sarah relationship one of TV’s most popular pairings.

The supporting men are up next!