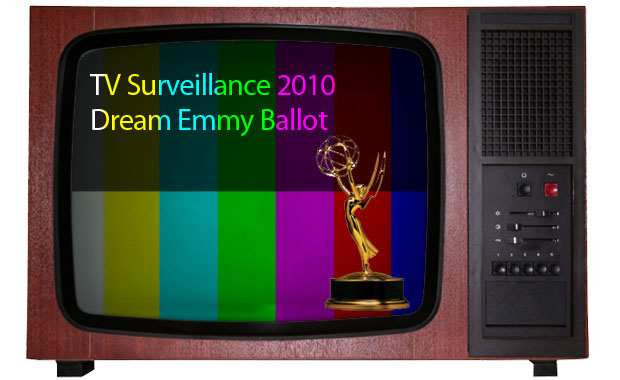 This week I’ll be pretending that I have an Emmy vote and discussing my picks for all the major categories. Once it gets closer to the time that nominees are actually announced, I’ll do an official “picks” column. Today: Supporting Actor in a Drama Series!

Sorry for the delay, I’ve been busy with my “wonderful” summer job. Ah, manual labor.

Like all the supporting acting categories, this is a very tough one.

Paul was a sort-of surprise nominee last year and so he’ll surely be nominated for his unbelievable work in season three. He’s my favorite to win this fictional ballot and the real one as well. The young actor has gone from simply holding his own with Bryan Cranston to oftentimes controlling the intensity and emotion of their scenes. His Jesse is one of the few characters on the series that we can root for and I think a lot of that comes from Paul’s performance. Jesse is like a beaten down dog who just wants someone to love him with random flashes of barking and foaming at the mouth. And Paul nails all those sides of him.

Ben didn’t have as much to do as I would have liked in the final season of Lost, but when he was on screen, last year’s winner Michael Emerson made it count. Also, despite his middle of the season disappearance, Ben was a crucial element in three of the season’s most emotionally resonant episodes — “Dr. Linus,” “What They Died For” and “The End” — which is telling. Emerson played Ben’s crisis of faith in the early half of the season and in “Dr. Linus” wonderfully and when he finally became something of a good guy, he was charming and even lovable. He’s a former winner for a reason.

O’Quinn — also a former winner for a reason. Though I’ve seen various stories and posts complaining about his performance as the Man in Black, I disagree. The transition from island man of faith to island Man in Black surely wasn’t an easy one for O’Quinn, but he made it work very, very well. He might have been hampered by scripts at certain times — NotLocke was maybe a little too eeeeeeeevil in the finale — but O’Quinn was especially solid in his performance earlier in the season when we had no clue exactly what his motives were. And when he was called upon to play John Locke in the sideways, his performance was even more vibrant and glorious.

Although his story petered out by the end of the season, we have to remember that Dean Norris’ Hank was the catalyst for so many great episodes and moments in Breaking Bad‘s third season. His version of PTSD was handled wonderfully over multiple episodes, turning the once-blowhard into something much more and Norris was easily able to handle the transition from goofy comedic relief to serious dramatic anchor. Even his more subtle work in the second half was surprisingly stellar.

This is certainly the dream portion of the category, because we all know no one from FNL would be nominated for an Emmy unless it is the casting department. However, Taylor Kitsch does extremely solid work every year, and I certainly love his performance throughout season four just the same. It’s one thing to be the cool guy with not a care in the world while you’re in high school, but it’s a whole new ballgame when you throw away your future and have to deal with the consequences — and Kitsch has played Riggins’ transition from careless to confused subtly, but fans of the series can see it.

Another long-shot contender that deserves recognition. I’ve said this before, but there’s two ways that actors play crazy. On one hand, performers take the “crazy” card and use it as a license to do whatever, whenever. On the other hand, truly great actors like John Noble make certain that there’s a reason and a purpose and a logic behind how he performs as Walter Bishop. He’s the heart and soul of a series that has a surprising amount of heart and soul, especially in the second season’s latter half when the story was all about Walter’s distraught nature over his past decision to bring alt-Peter to the first universe. Fringe is too science-fiction-y and will thus never be recognized, but everyone knows John Noble deserves it.

Up next: Supporting Actress in a Drama Series!