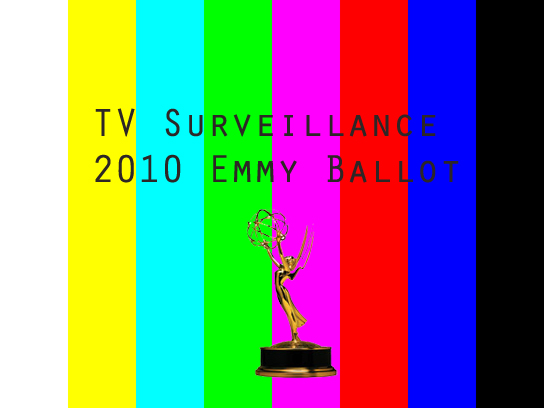 The title to this post is somewhat misleading because I’ve actually had my “official” Emmy picks finished for a few days, aside from a few of the minor categories I wrapped up yesterday. However, thanks to my summer excursion into manual labor, this is the first time I’ve had a real good chunk of time to sit down and actually post them. Thus, though they seem last-minute and are labeled as such, just know that I’ve put a lot of thought into these picks and didn’t look at the various picks posted on the web today.

And really, you know that I’m up on my Emmy knowledge, since I posted thoughts on the actual ballot, did a podcast on the matter and then Dream Ballot’ed you to death for a good two weeks last month. The worst thing about doing an official picks ballot after doing the dream ballot is that it’s just so depressing to compare the differences in quality. I hate to be so negative and say that the voters never get it right, but in a number of categories, the nominees are oftentimes disappointing. Thus, if you read the dream ballot posts, you’ll likely be depressed just like me.

This post covers all the major acting categories, including guest actor, as well as the writing and directing categories. I didn’t figure going into the miniseries or TV movie categories were really worth it because the nominees are going to be either A.) The Pacific or B.) something you or I didn’t watch. Each category will include my picks, a few on-the-fringes contenders and just a small batch of comments. Also, in each category, the order the expected nominees are listed is my makeshift way of ranking them by their chances to actually win the category. Because of the tardiness, I don’t want to waste your time with an ungodly amount of text.

Let’s do this, okay?

Like most of  you — hopefully — I’d love to see Parks and Recreation and Community grab two of the six/seven spots, but with two major newbies in Modern Family and Glee and Big Bang Theory gaining steam, I just don’t see that happening. I think The Office still gets nominated based on its watermark episodes and let’s just pray neither Entourage or Family Guy sniffs the category again.

This category is top-heavy and although I wish folks like Adam Scott and Zachary Levi would have a chance, they do not. I’m perhaps putting too much into Joel Mchale’s star power in picking him over Matthew Morrison, but boy was Morrison mis-used in the second half of Glee‘s season. And he was never funny. Oh, Tony Shaloub, thank you for going away and I’m sorry you have to take another nomination spot with you. Tom Jane is in the race because he’s on HBO series. Finally, I do think that Jim Parsons has a leg up on Baldwin this year. Just a feeling.

Toni Collette still might be the frontrunner after last year’s victory, but I can’t imagine the Sopranos fans among the voters being able to resist Edie Falco. Lea Michelle basks in the Glee glow, while I think Amy Poehler exists as one — if not the only one — of Parks and Recreation‘s only non-technical awards.

This is such a depressing category, with only one of my dream nominees actually making the official picks. I’d even settle for a different combination of six than my dream picks instead of the likes of Cryer and Morgan — he’s fine, just not totally deserving this year — but such is life as a follower of the Emmys. Nick Offerman could sneak in there because he has some buzz, but heck, I wouldn’t be surprised to see both Entourage fellas in there again.

Ew. I think the state of female supporting comedic performances has led to this weird decision to nominate SNL players, so Wiig isn’t going anywhere. If Modern Family just runs the table, expect Bowen to replace Jane Adams, but with the former not being funny that often and the latter the best part of a HBO series, I’m okay with Adams as the pick.

Guest Actor in a Comedy Series

30 Rock has the right amount of guest stars to dominate this category, so it will be interesting to see how many guests it can get nominated and how those folks will fare against Emmy favorites like Hamm, NPH and Alexander. Remember, the bigger the name, the better.

Guest Actress in a Comedy Series

It’s Betty White’s world, and we’re just living in it.

Writing For a Comedy Series

30 Rock has dominated the category over the last couple of years, so it will at least get two nominations despite the more cluttered competition this year. I could see “Fizbo” or “Wheels” replacing “Niagara” if either Modern Family or Glee run the table.

Outside: Community, “Pilot” and “Modern Warfare”

It seems like Ryan Murphy has this one all wrapped up.

The top four are locked in as can be and I don’t expect FX to be shut out or Good Wife failing to capture a nomination. If there’s a tie, House is an obvious choice for the seventh slot. It’d be great if Sons of Anarchy could take the FX slot, but I’m not sure it is “there” yet.

Lead Actor in a Drama Series

Like the series category, the top four are locked in. Baker seems like a near-lock to keep his lower-rung slot, leaving the final one up for real grabs between really three people (Paxton probably isn’t that close). I’d love for Fox to be given some love for his stellar final season work, but I’d guess the voters will take a similar action, just with a different actor in Sutherland.

Picking Segal to actually be nominated is my only true reach of all the picks, but it seems like her performance is buzzworthy enough to pick up a nom. Plus, Sons needs to get in the game somehow. This seems like the most logical choice. Even better if it keeps out Field and Hunter.

I’d love for Norris to pick up a nom, but this category is so stacked that it’s nearly impossible. It’d be more likely that Damages gets two slots here than Breaking Bad, just like the FX series did a couple of years back. John Goodman might actually help Treme get on the map thanks to his wonderful performance and big name. The two Lost actors at the top are no-doubts.

Lots of carryover from last year and the Baranski pick is based on all the buzz that The Good Wife could arrive big time. Moss drops from lead to supporting, and if you’re nominated in lead, you’re going to be in supporting as well. I wouldn’t be shocked to see either of the Grey’s Anatomy actresses take the actual award. The three ladies on the outside would be more my speed, but I can’t argue with these six.

Guest Actor in a Drama Series

John Lithgow has had this category in the bag since last fall. I’d love to see Zach Gilford and Walton Goggins get some love here, but this is a damn good group of six, even if J.E.J.’s House performance was only okay amid a ridiculous plot device.

Guest Actress in a Drama Series

A weird group of female actresses, but big names win out in the guest category. This is surely the only time that Burn Notice will ever be nominated for a major Emmy, so there’s that.

Outside: The Good Wife, “Pilot”; Treme, “Do You Know What It Means”; Breaking Bad, “Fly”

It’s too bad that Breaking Bad can’t break into this category with a few nominations, but it’s almost guaranteed that Mad Men takes three of the slots, even in a stacked year. I really hate the multiple nominations in one category stuff. Lost‘s finale is also a guarantee, leaving really just the final slot. I think House gets it because of its pedigree — former winner — but I wouldn’t be anywhere near shocked if The Good Wife pilot grabs the final slot.

Directing for a Comedy Series

Outside: Breaking Bad, “Fly”; Treme, “Do You Know What It Means”

Basically the same group of episodes here, with Good Wife slipping in and taking away one slot from Mad Men. Not sure that will really happen since the AMC cleans up here as well, but I’m hoping for some diversity. Again, too bad that Breaking Bad‘s “Fly” cannot jump up. If the series makes the leap to a more wide appeal, it will, but I’m skeptical.

Alright, that’s it, folks! Sorry for the delay. I’ll be back later tomorrow with analysis of the actual nominations and we can all mock how off I was with so many of the picks.

And if you need more Emmy posts, check out Myles McNutt’s extensive series of posts on the awards.