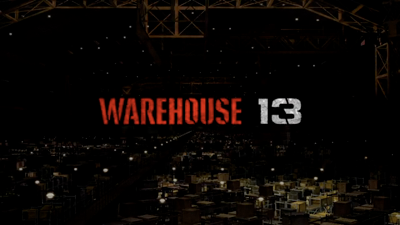 I’m a little late getting to Warehouse 13 this week thanks to USA premieres and whatever goofy issues Hulu was having with uploading the episode, which didn’t occur until late last night.

Anyway, “Mild Mannered” was a return to the flat-out goofiness that the series does so often and maybe it’s just my love of superheroes, but I found this one to be one of the better, more fun cases the series has done.

The thing about this episode and Warehouse 13 in general is that it didn’t surprise at all, didn’t try anything revolutionary, but still puts the pieces together in an enjoyable manner. The beats of a normal Joe turned superhero vigilante are completely obvious, but the episode threw in enough bones for comic book fans or even folks just kind of interested — Jack Kirby and Lex Luthor references, Pete’s interest — that it all worked. Pete quickly taking his clothes off in hopes of being a living, breathing superhero only to be denied based on possible impotence was totally goofy, but hilarious.

On a more serious note, both Claudia and Artie spent the episode trying to let go. For Artie, losing MacPherson is still tough to swallow since the two used to be partners and best of friends and the aural appearance of the friend-turned-villain — ghosts don’t exist, according to Artie — forces Artie to deal with those feelings. With Warehouse 13 being the kind of series it is and airing during the summer, there’s not a major expectation for it to dive head-first into character emotions and psyches with gumption, but Artie’s little inner battle was played nicely. Again, it was far from great, but Saul Rubinek sold it as well as possible and at least we now know that the series is willing to play those beats. And I have to imagine that the time piece MacPherson left for Artie will come into play later, right?

For Claudia, she was basically forced to let go of her rage towards Leena. Artie pushed the two to work together, which didn’t really work, but Pete and Myka’s insistence on not punishing the superhero wannabe was more or less done to prove to Claudia that sometimes good people do stupid things when under the control of artifacts. Not too subtle, but I’m glad that it was wrapped up because frankly, I don’t need my Claudia getting weighed down by Leena. And even though I wished last week that Leena could have more to do, having weird headaches doesn’t interest me enough to stop hating her as a character. I would have much rather her be an evildoer or die. Sorry.

I also liked the little bit at the beginning with Pete trying to get everyone in town to like him. I don’t understand why they wouldn’t, but it was funny nonetheless. But it’s odd that Myka’s personal belongings just came and Pete’s have not. Are we supposed to just think the mail is slow getting to South Dakota or is there more there?