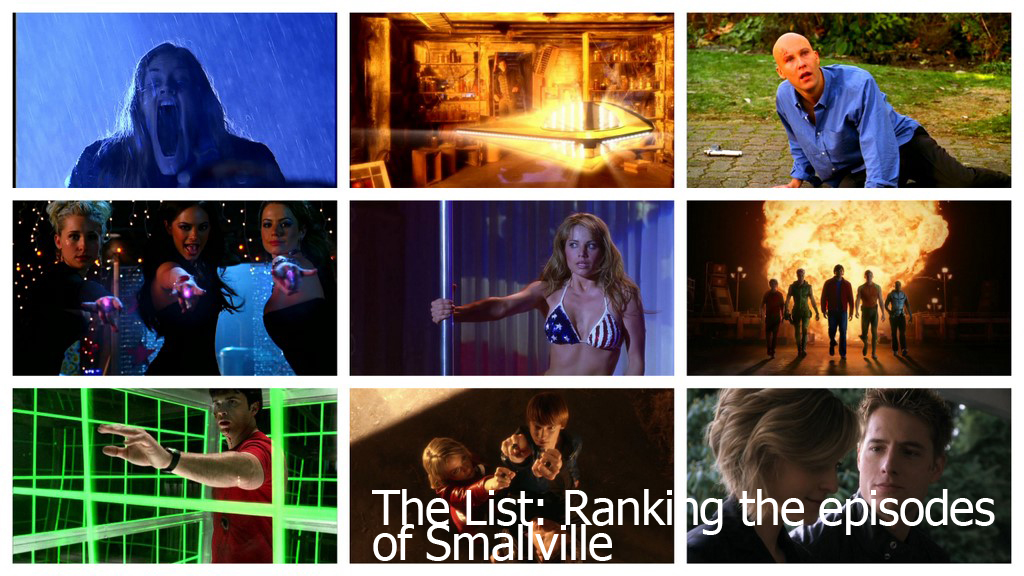 After the positive response to my ranked list of Lost and Office episodes, I just had to do another. Heck, even if there wasn’t a positive response for those two features, I probably would have done another one anyway because I love lists. I’ve been thinking about what series to tackle for nearly a month and finally decided on the one that I may be more familiar with that any other television series on air and one that is very difficult to organize based on the sheer number of episodes alone — Smallville.

I’m guessing a lot of the episodes found in this batch are ones most of you hate. I can’t disagree.

168. “Wrath” (S7): Lana’s string of destruction makes sense with her character, but that’s the point. In later years, Lana became too hard, too intense and just too dark for her own good and watching her terrorize other characters once she has powers was not enjoyable at all.

166. “Roulette” (S9): Much like Lana, Chloe has been too willing to go to dramatic extremes in later seasons and her attempts here to “save” Oliver by organizing another “Saw”-riffed deadly game is downright ridiculous. Would be lower if Justin Hartley didn’t actually sell this crap so well.

165. “Noir” (S6): This is the better of the two Jimmy-centric episodes and should be lauded for its solid set design and sense of era, but the story is ultimately fairly frivolous and the reasoning behind the specific approach doesn’t really hold up beyond, “Hey, let’s do a film noir episode.”

164. “Obscura” (S1): The sweet Lana-flying-towards-the-screen explosion that was used in the credits forever aside, this is another season one episode that’s mostly inoffensive, but doesn’t lend itself to enjoyable re-watches in retrospect.

163. “Fierce” (S7): Awful CW synergy, a season one-esque plot and the return of Lana when she really should have been dead — Yeah, this one sucks.

162. “Spell” (S4): This is by far, the silliest episode is Smallville history. However, it’s always fun to watch when I re-watch on DVD, something I can’t say for a lot of the episodes below it. Clark dancing is enough to make it to this still-low spot.

160. “Action” (S7): Clark leaving the prop cape on the fence while telling Lana that she and the farm is all he needs makes me want to vomit. Hold on a second, let me go do that.

159. “Velocity” (S3): Poor Pete Ross, the few times he was given a major spotlight, the episodes didn’t turn out so hot. I’m surprised it took the series this long to come up with meteor rock-fueled cars as a way to riff on “The Fast and The Furious.”

158. “Jinx” (S4): Much like a number of season four’s early episodes, this one is fun, harmless and fairly re-watchable, but still very, very goofy.

157. “Escape” (S9): Apart from the hilariously awkward dialogue between Clark and Oliver at the breakfast table, this episode felt like it was completely lifted from a fan fiction web site. In fact, I would actually believe that the production team literally stole this from a fan, though I’ve read better fan fic than this.

156. “Recruit” (S4): Clark playing football never sit well with me, so I never totally cared that he eventually chose not to play after the events of this episode.

155. “Reunion” (S6): While it was nice to dip into Oliver’s and Lex’s past, by this point in the series, I had grown tired of the “Lex had it so tough!” stories and an astral protection killer felt ridiculous even for Smallville.

154. “Fanatic” (S5): This is an okay episode that wouldn’t normally stand out, but it’s dropped right in the middle of the totally awesome early season five run from the premiere to “Vengeance,” making it seem even more sucky.

153. “Cool” (S1): For whatever reason, this is one of my favorite season one episodes and still one of the best Freak of the Week efforts.

152. “Crisis” (S3): I like toying with the space-time continuum as much as the next guy, but what a weak end to the promising Adam story, right?

151. “Doomsday” (S8): This might seem low, but I’ll say this: “Doomsday” is the most disappointing episode in the series’ history. The last 25 minutes of this episode are stupid, illogical, cheap, messy and just so enraging because the season that led up to it had been damn good.

149. “Quest” (S7): The end of season seven is obviously rushed and hackneyed, and the dialogues about Travelers and Veritas became especially annoying in this oddly-paced and weird episode.

147. “Hereafter” (S3): Though this episode features some great moments (the cape, Jonathan’s fall), it’s too mushy and drills home that Clark with ultimately be alone. As if he needed any more reason to be whiny.