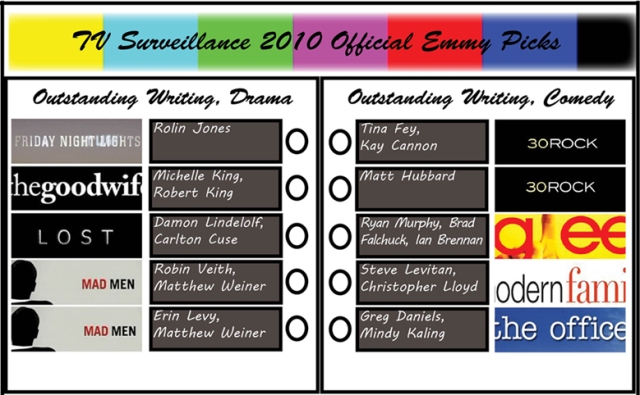 And we’re on to the writing categories today, folks.

What won’t happen: It’s amazing that Friday Night Lights finally got nominated for a major award, especially for one its finest episodes ever, but that’s as far as this train goes. I think we’re all excited that Rolin Jones made it this far, but that’s it.

What could happen: If the Emmy voters decide they want broadcast television to make a little comeback, The Good Wife might take home a substantial amount of awards, including this one. The pilot is sharp and the voters love pilots, so it wouldn’t be shocking at all if Michelle and Robert King get awarded for their work.

What should happen: I’m a major homer here, but I really do think that Damon Lindelof and Carlton Cuse should be the winners here. “The End” a wonderful episode, a glorious conclusion to one of television’s most important series and fairly standalone for people with basic knowledge of the story. Plus, it’d be nice to have Lindelof and Cuse’s full body of work be acknowledged with this award. I know that’s a lame way to give out awards, but hey, it fits my choice. And Mad Men is going to win for many years to come, anyway.

What will happen: Despite the end-of-series glow for Lost and the simmering buzz for The Good Wife, I think there’s only little question that Mad Men takes home this award. Again. There’s a battle between two episodes that could split the vote, but I think the glowing reaction to the finale, “Shut The Door. Have a Seat.” will continue here and Erin Levy and Matthew Weiner walk away with the trophy. And despite my Lost love, it’s really hard to argue with that.

What won’t happen: Though Greg Daniels was awarded for his work on the season three premiere, “Gay Witch Hunt,” that was at the height of The Office‘s quality and popularity. This isn’t that time, and now the series is kind of floating along without a whole lot of support. Although people liked “Niagara,” there wasn’t an overwhelming swell of fawn of support for the episode (especially that second half). The time has passed.

What could happen: 30 Rock has been the Emmy darling the last few years, so it’s weird to even be discussing its two nominations in this part of the post. With the Glee-Modern Family throw-down happening in many of the major categories, the NBC comedy is going to be pushed to the side a bit. However, it’s never smart to rule out Tina Fey and company’s appeal to the Emmy voters. Matt Hubbard won last year for “Reunion” and I believe he has the better episode here as well.

What should happen: As a major Office fan, I love “Niagara,” but there’s no question that Levitan and Lloyd should win for the Modern Family pilot. In a category that’s going to come down to Family and Glee, the former’s pilot episode is more polished of an episode and doesn’t have to rely on the flashy production numbers to spice it up (though both scripts aren’t home runs).

What will happen: I guess it is totally possible that Glee destroys a number of these categories or 30 Rock keeps the streak alive for the third year in a row, but all signs point to the Modern Family victory.