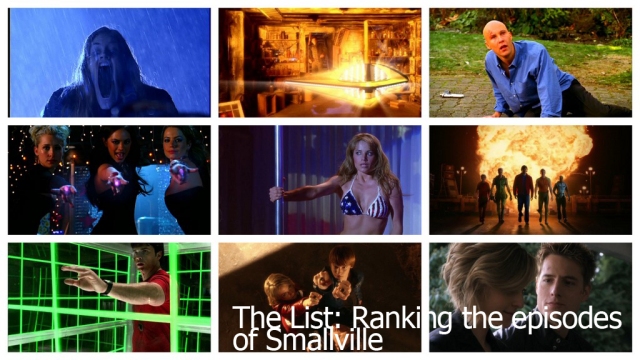 After the positive response to my ranked list of Lost and Office episodes, I just had to do another. Heck, even if there wasn’t a positive response for those two features, I probably would have done another one anyway because I love lists. I’ve been thinking about what series to tackle for nearly a month and finally decided on the one that I may be more familiar with that any other television series on air and one that is very difficult to organize based on the sheer number of episodes alone — Smallville.

Almost to the end everyone, let’s push through this and make it count.

49. “Checkmate” (S9): It seems like the people are most vocally against this episode only hate it because Lois was absent. That’s too bad because this is one of the highlights of a weak back-half season. The episode is exciting, world-building and includes that FANTASTIC scene that’s cut and directed like comic book panels. Some of my favorite editing ever.

48. “Apocalypse” (S7): Alternate universe episodes are always fun, especially when they come in the middle of a messy stretch of episodes and hint at lots of cool things in the series’ future. Of course, it is easy to make the audience feel good with glasses, Lois and Clark and an evil Lex, but I don’t care, this is a fun one.

47. “Beast” (S8): The Davis/Doomsday story derailed at the very end, but the character’s part in the destruction of the Clark-Chloe relationship was handled very well. This late season eight episode is surprisingly emotional and draining, especially the scene between Clark and Chloe on the phone. Welling and Mack prove how much chemistry they have in that one, you can totally feel the pain and hurt even though they’re not in the same room.

46. “Abyss” (S8): On a similar note, this early season eight effort is also tremendous, if only for the great production that take place inside Chloe’s mind. Some people had problems with Clark asking Jor-El to wipe her mind, but the scenes leading up to it were so good that I couldn’t totally complain.

45. “Labyrinth” (S6): Though this episode signaled that the rest of season six was going to be all about the Clark-Lana-Lex triangle, it’s a fine effort that builds a creepy mood and includes a number of great gags that do really make Clark seem crazy.

44. “Hex” (S8): I cannot believe how great this episode is, but it’s fun, smart and still delivers some nice character beats. One of the best to just randomly re-watch.

43. “Sacred” (S4): Like most of season four, this episode is totally ridiculous. It randomly expands the scope in ways the rest of the series never attempts. However, it’s awesome. The fight scenes, the torture stuff with Lex and Jason, etc. It’s all awesome.

42. “Solitude” (S5): Clark finds out and destroys Brainaic both for the first time in this really tense episode that had me convinced Martha might actually die.

41. “Zod” (S6): This episode has a lot of really cool things going on (Zod in Lex’s body, Clark in the Phantom Zone, Jimmy!), but kind of wastes them all by trying to stuff everything into 41 minutes. If this were more of a two-parter, it could have been much higher.

40. “Savior” (S9): The season nine premiere went a long way in removing the awful, awful taste the season eight finale left in my mouth. I never thought the series would be smart enough to keep the audience in the dark on major plot points (it rarely happened in the first eight years), but it was all in this episode.

38. “Idol” (S9): Like I mentioned with “Rabid” a post ago, the best thing about season nine is that it took goofy, surely-lame plots (like this one, with the totally goofy and cheesy Wonder Twins) and turned them into fine episodes that were entertaining, substantive and full of heart. A highlight of the season.

37. “Lexmas” (S5): For a while, this episode entertained me, but I didn’t find lots of meat on the bones. However, after seasons six and seven happened, it’s easier to point back to this episode and see the transition Lex was making at this time in his life. The alternate reality stuff is great, but the sobering conclusion really buttons it.

36. “Phoenix” (S3): Full disclosure: I had this episode much lower on the list when it was supposedly complete, but the thought that it needed to be higher just kept coming up in my mind. There’s some drop-off from the fantastic season three premiere, “Exile,” but this effort is a fine conclusion to that story that also sets the table for the series’ best season.

35. “Committed” (S8) and 34. “Crossfire” (S9): I’m pairing these two episodes together because they are both light on actual plot, but remain tremendously enjoyable because the writers are smart enough to let Lois and Clark carry the water. Both episodes feature a number of hilarious bits (the jewelry store scene in “Committed,” Clark’s date in “Crossfire”) and are still full of heart.

33. “Phantom” (S6): During season six, the series transformed into a purely popcorn melodrama and from start to finish, is really entertaining. The climax of that 22-episode run brings all the stories together well and brings in one of the series’ best villains in Bizarro.

32. “Bizarro” (S7): Speaking of! Great fights between the two Clarks in this one.

31. “Rogue” (S1): The best non-Pilot episode of the first season and the one that proved the series could do more than just FoTW stories.

30. “Pandora” (S9): The season nine mid-season finale had a lot to live up to, considering the first eight episodes were great and Lois’ flash-forwards presented intriguing story possibilities. Thankfully, it nailed almost everything.

29. “Hidden” (S5): The conclusion to the Clark-without-powers mini arc is thrilling and includes a number of memorable moments (Clark being shot, the slow motion walk back in the Kent house, jumping on the rocket). Also: Clark being shot is one of the great act-out cliffhangers in the series history.

28. “Nemesis” (S6): This might be one of the biggest WTF’s on the list, but I can’t help it. Clark and Lex trapped in the tunnels, dealing with all their issues is such a great premise for an episode and thankfully is well-executed. The Lana nonsense is well, nonsense, but the rest of the episode totally makes up for it.

27. “Calling” (S2): This episode feels more like part one of the finale than just your normal penultimate fare, and with that in mind, it’s like the happy time before it all comes crashing down in “Exodus.” Though they should probably be ranked together, I just can’t do it since the second half is so great on its own right (no offense to this one, obviously).

26. “Vessel” (S5): I have my issues with the second half of season five (it’s meandering, doesn’t seem to care about Brainaic that much, etc.), but a lot of them can be erased when I pop in this episode. Though I hate when the series makes everything Clark’s fault, it’s nice to see how Clark’s choices have really come to stab him in the back when the you know what hits the fan here.