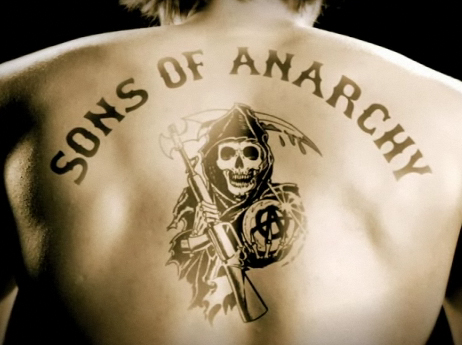 After a gripping premiere full of characters taking action, “Oiled” is much more subdued and exposition-heavy, as Sons of Anarchy settles in with its multitude of plot lines for season three. And while the ending result is not as enjoyable as “So” last week, the more subdued approach here is necessary to move forward.Early in the episode, Jax tells Tara that things are going to get a whole lot worse before they get any better, and as evidenced by this episode, that’s absolutely true. SAMCRO finds out that the attempted hit at the end of “So” was taken out by a smaller MC in nearby Lodi who are about to be swallowed up by the Mayans and so it was some sort of initiation. And though they end up with some information at the episode’s end, that doesn’t stop the fact that the Mayans are probably coming after SAMCRO. I guess Jax and company do appear vulnerable, and despite some support from the African-American MC in Lodi, I cannot imagine the situation with the Mayans clearing up over dinner.

Meanwhile, the situation with Abel, while appearing to get closer to resolution, is surely muddled up and far from finished. And actually, most of that has nothing to do with the Sons, but instead the inner workings of the Belfast/IRA crew. “Oiled” introduces us to Father Kellan, who, of course isn’t just a man of the cloth, but some sort of middle manager in the Belfast operation. He’s not happy with Cameron’s decision to kidnap Abel, but is willing to pay his body the respect it deserves after they kill him. Jimmy O (Titus Welliver) meanwhile, wants Cameron’s death kept quiet and keep up the relationship with the Sons (or at least appear to). So although Jax thinks he can get his kid back very soon, I’m betting the drama between the IRA folks is going to mess that all up and he’s not going to be happy.

But really, Jax isn’t happy now. His comment about things getting worse definitely applies to himself, as here he’s exceptionally violent and full of rage in ways we’ve never seen him before. In the past, Jax has been ambivalent about SAMCRO’s use of violence and sometimes didn’t approve at all, but that’s not the case anymore. He sees the MC’s operations, like this week’s assistance of a bounty hunter, as a way to push out some of that hatred and rage. And as Clay tells Bobby, perhaps they should just help Jax out by letting him be so violent. Maybe he needs this. Or maybe, as I’m sure Bobby is thinking, Jax is in no shape to be this violent when he could quickly turn too violent, even for the MC.

Because of Jax’s issues, Tara thinks she needs some time off from the hospital, something both Jax and her boss don’t really think is necessary. I’m in agreement there. If Tara takes more time off, she’s going to be sucked into the SAMCRO life even more, and I know that’s what she wants, but it cannot end well. She is enamored by the lifestyle in recent episodes, and though she is clearly modeling her lifestyle after Gemma, she also needs to realize Gemma’s current position. It’s not all good.

With the issues between the Sons and the Mayans (and anyone else who thinks SAMCRO is weak), Charming is now open to much more danger. Hale’s brother Jacob gives Unser a speech about how modernity has finally come to Charming and decades-old deals with the Sons that allow them to complete illegal activities in exchange for protecting the town aren’t going to keep the normal citizens safe. Though Unser doesn’t agree to back Jacob for mayor, he’s surely going to have to think about the safety of the town as a whole, and not just the MC.

And finally, for Gemma, what looked to be a heartfelt reunion with her father has quickly taken a turn for the worse. Tig does just what he does by having sex with the Guatemalan nurse Amelia (with lots of lube, apparently), and in a fit of confusion, Gemma’s father Nate shoots Tig in the back because he thinks that it’s his wife that SAMCRO’s sergeant-at-arms is screwing. In the hysteria Amelia sees that Gemma’s packing heat and after a quick internet search, realizes that Gemma’s a wanted woman. So of course, Gemma has to hold the nurse hostage. Good plan.

Nearly everyone’s on some sort of precipice. Jax thinks things are only going to get worse, and he’s probably right.