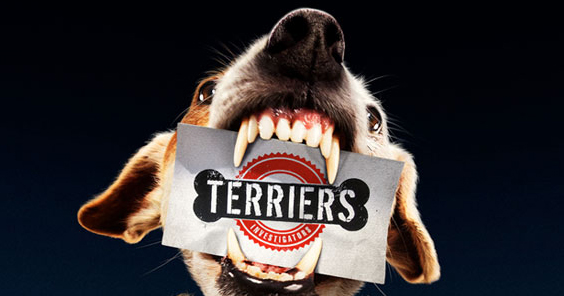 Terriers airs its season finale tonight at 10 p.m. on FX. You should, without question, watch it. It is the best new series of the fall and probably my favorite new drama series of the post-WGA strike era. With this being the afternoon before said finale unspools, I could spend a thousand words imploring current fans to watch LIVE tonight or pleading with non-fans to download episodes on iTunes, Amazon or wherever else because god damnit, Terriers is just so damn good.

But I am not going to do that. Other, better writers and critics have already done that kind of thing. Of course, you should listen to them, but that’s not what I am really here to discuss. Instead, because I am apparently an ass, I am here to play devil’s advocate of some sort. So I should probably stop bouncing around my argument because I’m afraid of being struck by lightning and just get to it:

What if…it’s…okay that Terriers gets canceled after the finale episode tonight?

Listen, I know that it is literally NOT OKAY that Terriers gets cancelled, but I couldn’t come up with any better way to phrase it. Trust me, I wrote five other sentences with the same slant. Again, I know it’s not okay if the series gets cancelled, that would be a fairly awful thing. Terriers, based on quality alone, should not be cancelled.

But over the past few days, I’ve been thinking about Terriers and two things really stick out to me about this whole situation.  First of all, I’ve sort of come to the realization that all the “Save ___” campaigns get me away too worked up and invested and while I’ve done some things to help Terriers along, I’ve tried to keep myself detached in some ways to avoid the heartbreak. That might make me a “bad” fan, but with so many things going on for me personally, I just can’t get too worried about unjust cancellations — especially when I have no pull anyway.

Secondly and more importantly, if Terriers goes to the big television heaven in the sky, won’t it go down as one of the best one-and-done series of all-time? And if so, is there anything to be ashamed of in producing one freaking excellent batch of 13 episodes that tells a great, presumably self-contained(ish) story?

Sure, there is no question that if Terriers comes back for a second season, it will probably continue to be awesome. There are no signs of wear and tear or storyline fatigue. It’s not a series that relies on such a large mythology that could perhaps unravel or crash under its own weight. It’s fully supported by great characters, great performances and great writing in such a way that there doesn’t seem to be any notable reason why all those things would suddenly go away. In short, Terriers doesn’t have the ingredients of a one year wonder or anything remotely like that.

However, in America, we put way too much focus on the continuing series. Anything that doesn’t last at least four years or 75 episodes feels like a moderate failure at best. The miniseries is basically dead, aside from the annual HBO historical one that wins all the Emmys that derail any momentum of the actual televised ceremony. Everything is about dragging things out, milking television content for all that it is worth, until there’s really nothing left. Broadly, we don’t understand or see much value in a 13-episode story that begins and ends, with no second season, spin-off or whatever else.

And again, I don’t think Terriers getting a second season is an example of FX dragging things out for financial gain, because A.) it’s only a second season and B.) there is little money to be made on a series that attracts somewhere around 500,000 viewers per episode when they air for the first time. But sometimes, and this might just be one of those cases, it’s alright for a series to come in, beat the hell out of us with a tremendous season of stories and then go away. Moreover, it’s not like the series would really ever go away, the DVDs will exist, the Amazon downloads will exist, it will make its way to Netflix.

Terriers would be one of those cases. If the series is canceled, I think it automatically goes to the top or near the top of the one-and-done television series slideshows that Entertainment Weekly likes to pull out every time a fairly recognizable series gets canceled. I haven’t seen Firefly (mostly because of the incessant hype) or Profit, but I’d be willing to have a discussion about the merits of the likes of Freaks and Geeks and Undeclared versus the merits of Terriers. In fact, I would love to have that discussion.

There is simply a lot to be said for being remembered as one of “the best one season TV series of all-time” versus a lowly-rated, but awesome series that was given two seasons. It’s an unfortunate badge of honor to have, but it’s certainly not the worst thing in the world either. So yeah, clearly, I’d love to have Terriers around next fall and for multiple falls after that. It’s an amazing television program. But after all the hashtagging and crying is over, I don’t think there’s anything wrong with how the series would be remembered, which is one of the best one-year wonders ever. Again, there are much, much worse things.