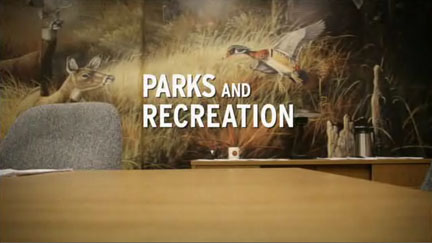 I think “Harvest Festival” might be my favorite episode of Parks and Recreation ever. I’m not really confident in that opinion since I’m still basking in the afterglow of watching the episode twice in less than a few hours and I’m mostly confident that it isn’t the “best” episode ever, but good lord do I love this episode. I was grinning from ear to ear from the very beginning of the episode and until the very end. As for more general critical analysis, I was very impressed at how seamless the transition between the last episode “Indianapolis” and this one seemed to be, even though they were written, shot and edited literally months apart. Amy Poehler might have been able to stand directly in front of the camera in this one, but the sense of pacing and vibe that the first six episodes of the season had is still very much alive within the moments of “Harvest Festival.”

My favorite episodes of the series are the ones that bring not only the entire primary cast together, but also integrates the kookiness of the whole town of Pawneee. The Harvest Festival obviously allows for that kind of dynamic, one that emphasizes the annoyances and troubles that continue  disrupt really great things from happening in small towns, despite all of Leslie’s fantastic work. I remember when I worked at my local newspaper for the summer I had to go to town hall meetings, school board meetings, etc. That summer (2007), a budget crisis struck the town, which meant that both the summer festival and the county fair were going to either be without rides all together or have to share them in a back-to-back schedule (instead of the usual June festival, July fair set-up). The political maneuvering/posturing and citizen ranting/complaining that took place was staggering, so much so that it basically showed me that I didn’t want to work as a newspaper reporter.

IN ANY EVENT, it’s experiences like that which allow me to totally relate to Leslie and the rest of the team’s experience while trying to accomplishing something with people like Joan Callamezzo breathing down their backs. Although I guess in my personal circumstances I WAS Joan, which is probably why I hated my job/life and decided not to become a reporter. Anyway, the suffocating and frustrating circumstances at which the Harvest Festival developed were so enjoyable to watch, so it’s no surprise that the actual beginning of the festival follows a similar path. Mo Collins’ Joan Callamezzo is the closest thing the series has to a primary villain (along with the library folk, I guess) but they’ve been able to use her sparingly without overdoing it or creating a situation where diminishing returns could be in play. And the thing about Perd Hapley is that he’s freaking fantastic. I don’t think I will ever, ever get sick of Perd. And I actually really like the Native American character as well, I really hope he returns to screw with Leslie and company.

Despite the big moments with the curse and the possible danger of the Harvest Festival, the episode finds some nice moments for each of the characters. I’m not exactly sure how much time is supposed to have passed between “Indianapolis” and this episode, but both Leslie and Ben and April and Andy appeared to be much closer than they were in the previous episode. That created a bit of some forced drama and awkwardness, especially with April and Andy, but the inherent charm and cuteness of the pairings kept it from being too much of a problem. Leslie and Ben were particularly charming and awkward and I really, really liked how Ben’s mid-episode crisis for thinking that HE was the curse wasn’t made out to be a major issue but still played into the character’s development as a lovable loser. Leslie gave him that hilarious pep talk about his terrible decision making that sort of felt like a capping moment to the last seven episodes of development. I’m not saying that Ben won’t continue to  have some issues with his past, but his confidence here and Leslie’s ability to reaffirm those moments of confidence could and should put him on the road to psychological and professional recovery.

And in general, this was just a fun episode for the whole cast. Sebastian the Little Horse was AMAZING. That’s probably my favorite teaser of all time. And Jerry in the corn maze! Just smile. Sometimes I have trouble writing about episodes I just love so much. This is one of those episodes.