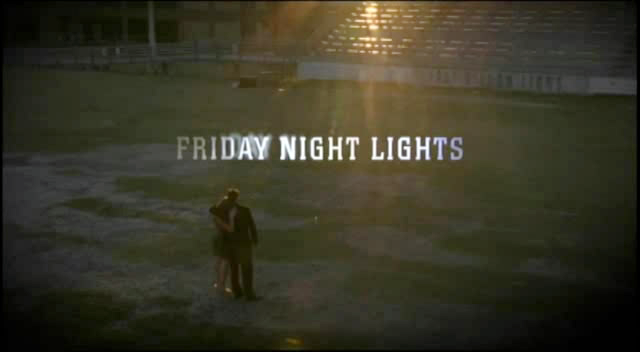 Again, this is the review from the DirecTV run. And because of my packed schedule back then, it’s also the last one for a few weeks. I might find time to write new reviews for the next few episodes, but probably not.

Sometimes, amid the top-notch acting, rock-solid writing and professional direction, we forget that Friday Night Lights isn’t any different from other mostly-soapy dramas. The series has done a number of goofy and stereotypical storylines throughout its run — many of which were found in the season we shall not speak of — but it’s the execution of those stories that takes FNL to another level.

The series is rarely doing anything new or original with its storytelling, but it continues to add subtle layers and fine execution to those basic tropes and beats. A number of plots in “The Right Hand of the Father” display these ideas very well, as most of the plots could have been much, much worse if were not for the performances (and probably the writing, but we never know exactly how much of the final product comes from which).

“Father” still feels like the series is setting the table for the season to come. Luke is still without a real story apart from his longing looks at Becky, who herself has had little to do this season and in this episode. New arcs for Buddy and Jess are introduced here, but again, the movement is fairly slow.

However, the one character who has been given a fully formed, multi-faceted story to deal with thus far in the early going helps anchor the episode in some really fine emotional moments. I made this observation back during the second half of season four, but it seems like the Matt Saracen-style story approaches have been applied to Vince since Matt took his drive to Chicago, wherein the world is always trying to beat him down, even while he tries to do the right things.

This season has extended that idea, because as I said, he’s the only student who’s been given both a football story and a personal story, both of which intertwine well to pack an emotional punch that most of Matt’s journey did. Here, Vince is yet again the center of attention and despite some initial trepidation based on my concerns about the clichéd nature of the story, by the time he breaks down in front of coach due to all the personal and professional stress, I was sold. Michael B. Jordan sure can act, right?

As we’ve seen in the season’s first two episodes, Vince has completely gotten his life together after the criminal entanglements that brought all the drama last season. He is staying out of trouble, he is in a healthy relationship with Jess, he is doing extremely well on the football field and perhaps most importantly, his mom has her life together.

But as we all know, getting your life together doesn’t mean that A.) it gets easy or B.) it stays that way. “Father” sees Vince experience the stresses of life related to those two changes, as Coach’s desire for him to be a leader and his father’s return home from prison push Vince to the brink and ultimately, over it in Coach’s office. As he says to Coach, he doesn’t really know how to be a man, how to be a leader. He’s good at football, sure, but he hasn’t really been asked to lead anyone but his mother, and with the father back in town trying to subvert that, Vince doesn’t really know what the heck to do.

Of course, this is Friday Night Lights, so what the heck to do usually involves responding to an emotional speech from Coach Taylor and kicking some ass on the football field. I don’t care that it’s typical that those two things happen in rapid succession here, because Michael B. Jordan sells every single scene to the best of his ability. Jordan has an inner strength that Zach Gilford didn’t need to bring to Matt, but he can still sell the sadness and pain in the eyes, and when he explodes in Coach’s office, it’s a wonderful moment, supplemented of course by Kyle Chandler’s subdued reactions.

Unfortunately, the rest of the episode doesn’t pull its weight behind Vince’s great arc. After the video of Maura being sort of-assaulted at the party hits YouTube, Tami and Eric take similar paths in attempts to clean up the actions of both the team and the school. For Coach, that means kicking off two screw-offs and forcing the team to wear shirts and ties on game days.

But for Tami, that means giving a whole lot of speeches to students who don’t seem interested in listening. In one of Connie Britton’s best moments of the series, she literally screams at a mouthy student, which is great, but the rest of the plot doesn’t really hold together. Tami continuously pesters Maura in hopes that she will turn her life around, and by the end of the episode, it seems like she just might. It’s not that I don’t think Tami could motivate a weak student into doing the right thing, it’s just that I don’t believe she could motivate this specific student in just a few days, particularly when she starts from a place of such opposition. It’s a little too convenient.

Moreover, Julie Taylor continues to act like a fool in her relationship with the scumbag TA. I get that Julie doesn’t really have any friends at Unknown U — even if I don’t buy that no one, particularly boys, would avoid her — but I am so enraged by both her actions and the actions of the douche TA. It turns out he’s married, but apparently he’s not really happy and also abides by the Zip Code Rule, as he lets Julie regurgitate his discussion of “taking chances” as a way to make the move. They end of having sex, and everyone involved should be disappointed. I assume this means Julie will eventually get scared and come home to Dillon, which would be better for us as a viewer, but not for her as a character. Just send her to Chicago already!

Buddy bring his son back to Dillon could be interesting as could Jess’ new role as the equipment manager, but neither get enough mileage here to really be worth writing up. Not the best episode ever, but Michael B. Jordan helped make it much better than it probably should have been.