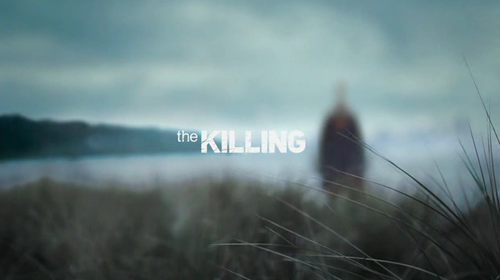 This is going to be a slightly different kind of review, mostly because it’s going to talk just as much about the reaction to the episode as it does the episode itself. If you’ve been on the site over the last week, you probably came across my frustrated rant about The Killing, pre-finale. After watching tonight’s season finale, “Orpheus Descending,” the things I said in that column are even more true and probably even more rage-filled. Without question, “Descending” provides a maddening “conclusion” to a season that had its fair share of maddening developments. Actually, it’s kind of hilarious that I titled that post “Empty twists,” consider what the series gave audiences in the final moments of this season finale.

Listen, I have no problem with a series taking a risk/stepping outside the box/whatever other trite platitude you can think of. Crazy, shocking twists are just fine in my book. But they really do need to have some semblance of purpose or relevance to the events as they have developed to that moment. This feels especially true for season finales, when series tend to throw out as many wild cliffhangers as possible, sometimes without regard for where they actually fit in to the overall narrative development of the series.

I’d like to say that what happened in the final few minutes of this episode were purposefully risky and at least somewhat connected to prior events, but I just cannot. Although the reveal that Holder actually manipulated the traffic camera footage that put Darren Richmond in bracelets for the murder of Rosie Larsen for some nefarious reasons does pique my interest in the most general sense (as in, “Why in the hell did he do this?”), it is hard to find anything in the series’ previous 12 episodes that we could define as evidence for any behavior like that from Holder. I get it, that is supposed to be the whole point. It is so shocking. But it feels so much like shock for shock’s sake, and it is especially damaging because it involves the series’ best and most interesting character. Holder carried the season, even during those mediocre middling episodes and became really engaging over the last three episodes. The comfortability he and Linden shared by the end of the season was admirable, which only makes his betrayal that much worse. Again, I understand that the fits of anger I’m feeling towards the twist is reaction The Killing brass wants me to have. It is supposed to be a hurtful betrayal.

But after something like 10 episodes of middling plot development powered by a few wonky twists, it seems misguided to meander towards a fairly obvious conclusion and then pull the rug out from underneath the characters and the audience at the very last-minute. Most frustratingly, the episode-ending reveal does absolutely nothing to fix the series’ biggest problems or resolve its important questions. Obviously, we still don’t know who killed Rosie, which is problematic, although I can live with, honestly.

Yet more importantly, this episode and the cliffhanger in particular don’t deepen the characters in any purposeful way or really conclude a thing. The Larsens are still stuck in the repetitive cycle of misery. We still don’t know enough about Linden’s past that supposedly haunts her, and the same could be said about Holder. Darren Richmond is probably dead and we never really learned much about him either, which makes his entire character wasteful. The Killing was supposed to be a series that used the death of young girl to tell a complex, interesting story about the people and forces surrounding that death. Outside of a few beats here and there, The Killing failed miserably in this regard, which leaves the murder mystery as the primary quality. And well, you know how well the series handled that element of its narrative as well. I didn’t need this case to come to a close and most of these characters come to some substantial resolution, but I need some resolution. This episode and this season totally disregards the value that can be found in providing short-term satisfaction while holding on to ongoing mystery and tension.

Nevertheless, what is really interesting to me in the wake of this really poor episode is the reaction. Because of tonight’s jam-packed television schedule, I watched the second airing of “Orpheus” and by the time I made my way back on Twitter, the digital version of the Vancouver riots had already begun.* Nearly everyone in my feed who watched the episode was reacting with a heavy amount of vitriol and the reviews weren’t much better. That Alan Sepinwall, Matt Zoller Seitz and most notably, Mo Ryan (who called this “the worst season finale of all time”) all destroyed this episode and the series did not surprise me. What did surprise me is how strongly and viciously these critics destroyed this episode and the series.

I’m not here to tell anyone how to do their job, especially one that is based entirely around subjectivity. If Mo Ryan thinks this is the worst season finale she has ever seen, by all accounts, she’s more than qualified to voice that opinion. If folks on Twitter want to call for Veena Sud’s head, er, I mean job, that’s absolutely fine as well. Opinions, no matter how fervent, are always welcome. But I think the horrible reaction to the season finale of The Killing hints as something larger: People, especially people who get paid to give their opinion, don’t like to be proven wrong and definitely don’t like to be betrayed.

In the beginning, The Killing was nearly universally loved. The first two episodes were pretty darn good, “we” (and by that I mean the digital circle of television critics and savvy fans who interact with those critics) agreed. But by the end of the season, I think it is safe to say that all of us who loved those early episodes ended up being wrong, or at least had our expectations, hopes and opinions on The Killing thrown right back in our face. The series betrayed us and perhaps most importantly, it wasted our time. There are so many other, better things we could have been watching over the last 10 weeks, but we stuck it out with the hope The Killing could pull it together. It did not.

Social media and online reviews exacerbated this further, as it always does. To be where we are now with The Killing and to have gone through this weird experience where the Next Great Cable Series quickly devolved into mediocrity and then something even worse together on Twitter and in the comments sections of critic’s reviews, it’s no surprise our little corner of the internet exploded in rage this evening. We’ve been discussing the problems with the series for weeks now with the caveat that maybe things could improve or at least stabilize (having Richmond be the true murderer, with no twist ending would fit this bill) and in the end, The Killing not only didn’t improve or meet our severely lowered expectations, it dipped even further into the depths of mediocrity and stupidity to a space reserved for the worst episodes of 24. We were tricked by the first few episodes and as I also discussed previously, we were tricked by the shiny new (and ultimately, false) prestige of the AMC brand. Thus, insanely mean reviews, hate-filled Tweets and generally overzealous reactions to an episode that was actually kind of OK before the last three minutes. I’m not judging and it was a fun experience to be a part of, but still one worth pointing out.

I’ll be back for more episodes of The Killing in season two. My expectations will be tremendously low, but I’ll be back. And that’s probably all AMC cares about anyway. So you win, Veena Sud!