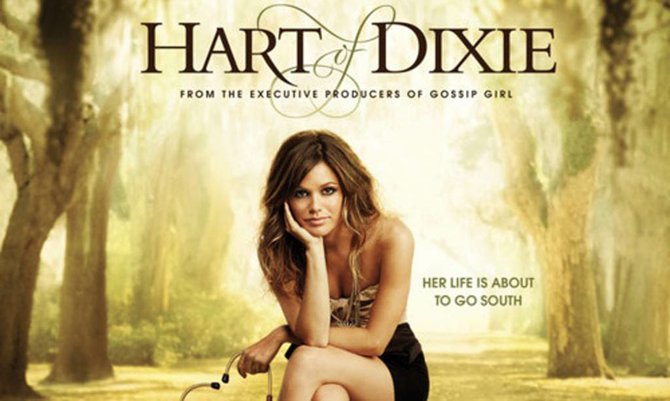 The next couple weeks are going to be insane. There are so many new series debuting and unfortunately, there is only so much time in the day for me to write about television while balancing my “real” life. You know, the one I spend on Twitter. ANYWAY, I’m going to try to touch on each new series once it airs a pilot, but these posts probably won’t be too long or too in-depth unless they really need to be. And if certain things debut together, I’ll probably talk about them together.

When we tackled Northern Exposure in a recent edition of Test Pilot, I discussed the lack of small town dramedies on television right now and wondered if the WB/CW was really the only place willing to still do that kind of series. Well, The CW heard my call and decided to fast-track Hart of Dixie to the airwaves as quickly as possible so that I wouldn’t be upset any longer. And to make things better, they even included one of my favorite television actresses in Rachel Bilson! Gosh, thanks for listening CW. I knew that this blog would have an impact on the world eventually.

Seriously though, it’s nice to have a series like Hart of Dixie on the air. On the surface, this feels like a small throwback to the kind of thing the WB use to do very well (sup, Everwood) and when mashed with the reference-soaked sensibilities of Josh Schwartz and Stephanie Savage, Dixie could be a solid little performer. I guess there’s also a danger that the writers get too cute and this turns into October Road. This pilot episode doesn’t really give any indication that Hart of Dixie has the capability of being as good as Everwood or Gilmore Girls, but also doesn’t present any major issues that could quickly shift things towards October Road territory either. So…victory?

This opening episode is entirely predictable. Even if you didn’t watch, you could correctly guess about 97 percent of the beats, character types and initial plots: Snotty New York doctor moves to a completely different locale (mostly against their will), hates it there and then starts to realize that this new locale has some charms of its own, including members of the opposite sex and other friendly folk. Since I just watched Northern Exposure a few weeks ago, I couldn’t help but notice how structurally, this is basically the same story. The only big changes are that Bilson’s Zoe is not as terrible as Rob Morrow’s Joel (although Dixie keeps having other characters tell us that she kind of is, one of its biggest issues) and there’s a goofy twist at the end which helps Zoe stick around while also sort of keying us in to why she was raised a certain way.

I don’t really have much of a problem with this episode’s predictability. The whole purpose of a pilot like this is to get the character to the new location, introduce a few obstacles and convince her and us that we might want to stick around for a little bit longer. Hart of Dixie pretty much accomplishes those minimal goals and gets by a great deal on Rachel Bilson’s solid charm. Like I mentioned, the script keeps wanting us to think that Zoe is this awful, heartless person, but there’s nothing that Zoe really does that embodies those internal issues. Other people tell her that she’s closed off and cold, but if you’re an OC fan, you just sort of expect Bilson to play a sarcastic, somewhat guarded young woman. Zoe isn’t that different from final-season Summer Roberts. She’s a little more driven and probably more intelligent, but Bilson has a sweet-spot that she clearly likes to work within and I have no complaints about that. But either the series needs to stop having other people say what’s wrong with Zoe or show it a little more. Nevertheless, this is a good role for Bilson. She plays moderate fluster and discomfort well.

The rest of the cast is fine. Scott Porter probably deserves to have a better job than the male lead on a CW dramedy, but he’s doing his best with what is a stock character. I like Jaime King and Cress Williams, so I’m just going to assume that later episodes will figure out better ways to use them than they are here. Wilson Bethel is fine as the bad boy love interest, I guess.

There’s been some discussion about the lack of real representation of the south in this series and I guess I can see that, but I don’t know what people expected from a Schwartz-produced series on The CW. Though Dixie‘s version of Alabama doesn’t have the verisimilitude of The OC‘s Orange County or even Gossip Girl‘s Lower East Side, it isn’t overly terrible. The series will need to fill out the world with more relatable and believable characters moving forward and maybe not rely on alligators for their jokes so much, but I wasn’t offended by anything that I saw in these opening 43 minutes. This pilot had an easier time defining its world than it did defining the characters, which is troubling, but not severely detrimental.

Again, Hart of Dixie is not that good. This pilot is predictable, obvious and yet, still relatively enjoyable. It’s a small town dramedy with pretty low stakes and intentions, but there are a lot of solid performers involved that make the generic material a bit better. I’m hoping that with more time, the writing matches up to the abilities of Bilson and Porter, but if it doesn’t, this is still an OK way to spend an hour each week. Especially if you love Rachel Bilson. Which you should.