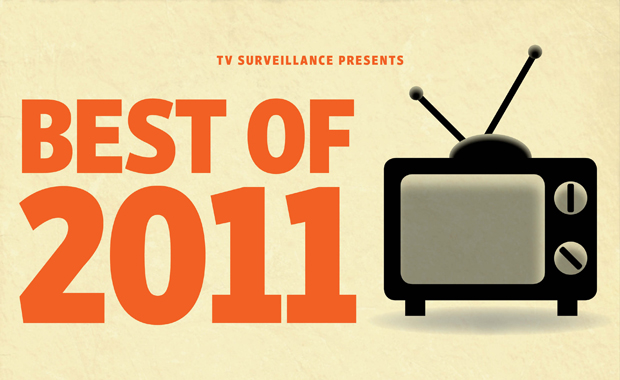 It is that time again folks! The end of the year is upon us and that means it is time to look back on the highs, lows and WTFs in television from the past 12 months. There is a lot to reflect on in regard to television 2011. Charlie Sheen went crazy. Well, crazier. Comedy supposedly made a big comeback. We found out what The Event was, I think. Steve Carell and Michael Scott said goodbye and we were sad. The guys from Entourage also said goodbye, and we were less sad. AMC tried to break a Guinness Book World Record for number of stupid PR disasters by a cable network.

This year brought us a number of great new series such as Homeland, Happy Endings and Game of Thronesand a slew of horribly awful ones such as The Paul Reiser Show, How to Be a Gentleman and Charlie’s Angels.True Blood and Glee kept getting worse while Community and Justified kept getting better. 2011 was the year of Louis C.K., the year of sexposition and the year of The Killing. Over the next few weeks, I will be posting all sorts of lists, podcasts and pieces reflecting back on the year that was. So join me in saying farewell to what was a very compelling year in television. There will be so many lists.

You folks know how much I love making lists. Sometimes, that love gets out of control. This is one of those times. I had initially thought of doing another top 50 episodes of the year list. Then I pushed that number to 75 episodes. By the time I put the finishing touches on it Wednesday night, the total crept up to 100. Thankfully (I guess?), I stopped there.

With all that being said, I will, over the next two days, present to you the top 100 episodes of television from 2011. There are of course caveats and points of positionality I must inform you of before we actually get to the listing part of the proceedings. First of all, as always, this is a list that reflects my personal tastes and interests just as much as it reflects my “critical faculties” or whatever you want to call it. This means that certain series won’t appear on the list, either because I flat-out don’t like them or I just couldn’t get to them in 2011. Included in this small group are the likes of Downton Abbey, Curb Your Enthusiasm, Shameless, Treme, It’s Always Sunny in Philadelphia and Children’s Hospital.

Second of all, I decided to limit the number of episodes each series could have on the list to five. This presents the list from being dominated by all 13 episodes of Breaking Bad, Louie and Justified’s respective seasons or just as many episodes from broadcast series like Community or Parks and Recreation. This leads to a more diverse list, particularly in the bottom half, where I have inserted single episodes of series nowhere near the quality of the year’s greats. Those episodes aren’t objectively better than a sixth or seventh episode of series that dominate the list, but I think it’s still important to give them their due nonetheless.

You might scoff at an episode of Nikita being higher than episode of Breaking Bad, and I of course agree with that surprised sentiment. Thus, ultimately, this list ends up being less a completely scientific rendering and ranking of individual episodes and more a reflection and cross-section of the many great things that we saw in 2011. The numerical rankings matter, especially in regard to which group of ten individual efforts fall in (i.e. episodes 31-40 were purposefully chosen to be above 41-ownward, even if the distinctions between 31 and 32 or 34 and 35 are less important), but not dramatically so.

One final note: Because of the sheer amount of episodes on this list and the amount of content I’ve written over the last week, I’m eschewing providing blurbs about every episode. I really hope that doesn’t upset you. Precautionary apologies.

50. American Horror Story, “Smoldering Children”: Unsurprisingly, the strongest parts of the wacky and oftentimes very bad American Horror Story were the teenagers. When he wants to, Ryan Murphy can write or guide very great stories about confused, emotionally damaged youngsters and “Smoldering Children” was no different. Uncomfortable Tumblrs aside, Even Peters and Taissa Farmiga were pretty great together all season.

47. Doctor Who, “The God Complex”: My opinion of this season of Doctor Who varies greatly from the norm, I think. It seems most folks really loved the big mythology episodes, but I found many of those to be convoluted and over-complicated for complication’s sake. Instead, I adored many of season six’s standalone episodes. This late-season effort featured a mostly-straightforward monster story, but did some really interesting character things with the Doctor.

42. Smallville, “Finale”: Sure, it didn’t feature many great full-blown Superman shots. And sure, it rushed through the Darksied confrontation hilariously fast. But if you watched Smallville for 10 years and followed the journey of this Clark Kent and this Lois Lane, I can’t imagine you weren’t moved by the finesse and respect paid to their relationship and the solid conclusion to both of their personal arcs. 10 years is a very long time, but “Finale” made it all pretty much worth the wait.

40. The Vampire Diaries, “The Birthday”

39. The Chicago Code, “Mike Royko’s Revenge”: The Chicago Code is one of those series that I feel like I lot of people are forgetting about when it comes to these end-of-the-year lists. I guess that is fitting, considering a lot of people ignored it during its rock-solid 13-episode run in the early part of the year. This episode, which ended up being the series finale, brought the season’s biggest stories to a very satisfying conclusion, albeit a slightly one.

37. The Walking Dead, “Pretty Much Dead Already”: I liked this half-season of The Walking Dead more than most and the mid-season finale concluded with a masterful final 8-10 minutes. It probably took too long to get there, but Rick gunning down zombie Sophia was a legitimately powerful and game-altering moment.

35. 30 Rock, “Double-Edged Sword”: Amid all the internet chatter for Community and Parks and the respect paid to The Office with Steve Carell saying goodbye, we sort of forgot that 30 Rock turned in a great fifth season. At this point, the series can be hit or miss, but this one featured one of the most gut-busting hilarious sequences of the year with Liz and Carol having it out on a grounded plane. How Matt Damon didn’t win the Emmy is really beyond me.

32. Homeland, “Marine One”: If you’re disappointed by this finale, I can’t help you. Tremendous finale on a character level and a very great resolution to one of the better freshman seasons in recent memory.

30. How I Met Your Mother, “Last Words”: Jason Segel’s performance in this episode was multi-layered, equal parts heartbreaking and darkly funny. The group’s family dynamics are on full-display here, as Marshall’s pain reverberates down to them. How I Met Your Mother isn’t quite what it used to be, but it can still turn in an episode that reminds you of why you loved it in the first place.

29. Community, “The Paradigms of Human Memory”

28. Parenthood, “Do Not Sleep With Your Autistic Nephew’s Therapist”

25. Enlightened, “Consider Helen”: The grocery store conversation between Diane Ladd and Barbara Barrie. That is all.

23. Boardwalk Empire, “Under God’s Power, She Flourishes”: Boardwalk’s second season saw a solid increase in quality for most of the season, but the drama jumped even higher with a fantastic three-episode run to end the season. The flashbacks to Jimmy’s time at Princeton, the initial stages of his relationship with Angela and those creepy moments with his mother filled in the blanks with great depth and steely intensity.

21. Parks and Recreation, “Smallest Park”: Parks has been less overtly funny and more earnestly sweet this fall and though I see where people prefer the former, I’m just fine with the latter. It’s hard not to be a Leslie-Ben shipper, just as it’s hard to not get choked up by their stirring and funny reconciliation.

18. Community, “Intermediate Documentary Filmmaking”: People had their various issues with Pierce’s descent into full-blown villainy in season two of Community, but never was that story more interesting than in this mockumentary-style effort. Chevy Chase turned a somewhat oddly-muted performance and Pierce’s energy nicely contrasted with the uncomfortable, manic work that the rest of the cast/characters delivered.

17. Archer, “The Heart of Archness”: I cheated. This is three episodes. Sue me.

13. Happy Endings, “Spooky Endings”: Great sitcoms tend to find a holiday that they can really latch onto, one that matches their sensibilities. Friends has Thanksgiving. The Office has Christmas. Another standout episode like this and Happy Endings might just have dibs on Halloween.

12. Breaking Bad, “Hermanos”: No series treats its audience with more respect than Breaking Bad. Instead of talking down or explaining everything, Vince Gilligan and his team trust the fans to watch, understand and enjoy extended flashback sequences full of unrecognizable characters who don’t even speak English.

8. Supernatural, “The French Mistake”: Be as meta as you want Community. I’m not sure you can top this complex and hilarious ode to Supernatural fans and its place within the television industry.

7. Justified, “Brother’s Keeper”: Justified season two is a shining example of how important seasonal plotting is to a story. Many great of the year’s stories convalesce and temporarily resolve here, but the events of this episode’s final minutes also serve as the catalyst for the season’s stretch-run. Fantastic writing.

5. The Office, “Farewell, Michael”: Steve Carell and the series’ writing staff smartly underplayed Michael Scott’s departure, choosing to keep things as simple and moving as possible. If you’re an Office fan, I dare you to watch the last 10 minutes of this episode and not cry.

1. Friday Night Lights, “Always”: It was my number one episode of the 2010-2011 season and although there were tons of great episodes that aired between May and December, I can’t bring myself to move them past the Friday Night Lights finale. The conclusion is easily expected, but these 60-plus minutes are thrilling, emotionally-wrenching, celebratory and pitch-perfect on a character level. The series didn’t have the massive mythology to handle, but Jason Katims and his team still nailed that landing. Texas forever.

There you have it folks, the top 50 episodes of the year. What do you think?