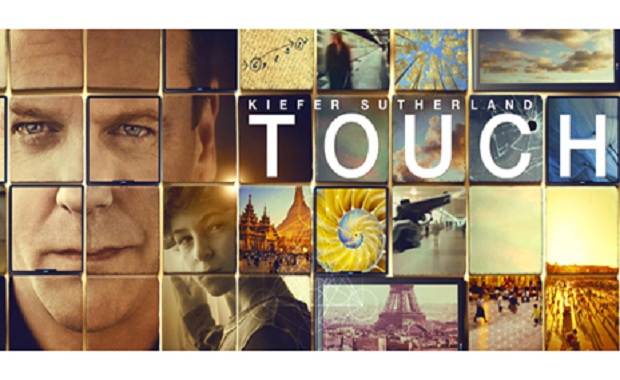 Let’s get this out of the way first: Tim Kring is the worst. He is not just the worst because he took a series with a great concept and a handful of truly good episodes in Heroes and quickly ran it into the ground, repetitively. Tim Kring is just the worst because he knows exactly how to front as something much better than the worst. He is one manipulative son of a gun; he knows how evoke grand themes, larger connections and basically force emotion out of you because of the contrived circumstances he’s created for you. So, as you’re recognizing you hate him, there are moments where he sucks you back in – even though those moments only further embody why he sucks so much in the first place.

Armed with that knowledge, it’s much easier to watch Touch. It’s also easier to chuckle at Touch and its pretentions, its false grandeur and its dense simplicity masquerading as great depth. If you’ve seen Kring’s pilot for Heroes, you probably quickly started having PSTD flashbacks during Touch’s preview showing last night. Hackneyed voiceovers, a worldwide focus, coincidence posing as fate and the sense that evolution is changing the world right underneath our noses, it’s all here. Even the score follows that simultaneously stirring and annoying (because it’s in every scene) pattern that eventually caused Heroes fans to drink themselves into thinking everything would be fine.

There’s no question that if this pilot were produced and aired in a vacuum, it would be a lot easier to appreciate. I totally understand why Kiefer Sutherland chose this script for his quick return to television. Martin Bohm isn’t Jack Bauer, at least at the beginning here. They’re both broken men, but have reacted to their struggles in completely different ways. Whereas Jack’s damaged past and consistent pain allowed him to turn into an efficient killing machine of vaguely-Middle Eastern and Russian terrorists, Martin is just struggling. His job sucks. His autistic son has never talked to him. His wife is dead. He has no money. In some ways, Martin is a more admirable guy than Jack because he’s barely keeping his family together despite awful circumstances.

Nevertheless, Kiefer Sutherland is really, really good here. I’ve seen every episode of 24, many of them multiple times, but the last season (and really the last few) sucked the life out the character and his performance a bit, so I forgot just how big of a television performer he is. Kring’s script calls for him to eventually start running around and yelling, but it’s in the final few minutes where Kiefer shines. He helps make Kring’s manipulative “conclusion” go down a lot smoother than it has any business going. Whether you ever watch an episode of Touch again or at all, just remember this when Kiefer gets nominated for an Emmy for his work here (and someone like Damian Lewis of Homeland gets shoved out).

Moreover, there are beats and moments in this pilot that work quite well. Again, Kring isn’t dangerous just because he sucks, he’s dangerous because he knows how to make the best kind of sucky television out there. The global, multi-thread story recalls Heroes but also recent films like Babel,* and even though Kring telegraphs much of what’s to come in the episode’s final act, it still kind of works anyway. The young Middle Eastern man’s story was probably the most compelling and even though it was absolutely the most manipulative, I felt a small tug on my heart strings when the guy looking for his lost phone finally revealed why and then just happened to be in the right place at the right time so that he could see the missing pictures of his daughter on giant screens in a massive metropolitan city. Sorry, I had to type that in italics so you could recognize the contrived nature of it all.

*I cannot wait until Kring comes out and says that he’s never seen Babel and he’s insulted that you do not trust his ability to come up with novel ideas.

But nonetheless, in a single 50-minute chunk, the ridiculous, coincidence/fate storytelling device works fine. The scene where Sutherland’s Martin listens to a message from Titus Welliver’s character, a man he keeps running into somehow, and learns that this man happened to be the one who tried to save his dead wife on 9/11*, is pretty great. It’s stupid, entirely manufactured and passed off as supremely powerful, but it’s still kind of great. This, ladies and gentlemen, is why Tim Kring is so dangerous.**

*Honestly, it should be illegal for Tim Kring to evoke 9/11 in anything. I’m not sure, but I think the phrase “the worst of both worlds” was created just for this combination. IT IS FATE.

**It’s important to point out that Kring’s suggestion that Jake’s autism actually gives him a quasi-super power and makes him extra-super-duper special is sufficiently insulting to anyone with a pulse. Not to mention just stupid as a plot-point. His obsession with evolution scares me a little bit.

Despite Touch’s dumb successes (and Sutherland’s legitimately good performance), we’ve been down this road before. And I’m guessing not too many people want to be tricked by the guy who put his lead characters on Heroes through the same stories for three straight seasons for deciding that his big idea to solve the story was TRAVELING CIRCUS. Even more so than the opening salvo of Heroes, Touch doesn’t feel like it can succeed moving forward. Kring’s reliance on repetition completely aside, this isn’t a story that can work in the long haul. I mean, I liked Early Edition just fine when I was eight years old (Kyle Chandler! That cat! Fisher Stevens!) and tolerated Mercury Rising. I’m not sure I, or anyone, needs 60 episodes of Kiefer solving crimes, pretending not to evoke Jack Bauer characteristics and discovering that we’re all, actually connected. But I can’t wait for that traveling circus.

Like Loading…
← The value of work: On the success and appeal of labor-centric reality programs
→ #TVFail Entry 17: 30 Rock, “The One With The Cast of Night Court”