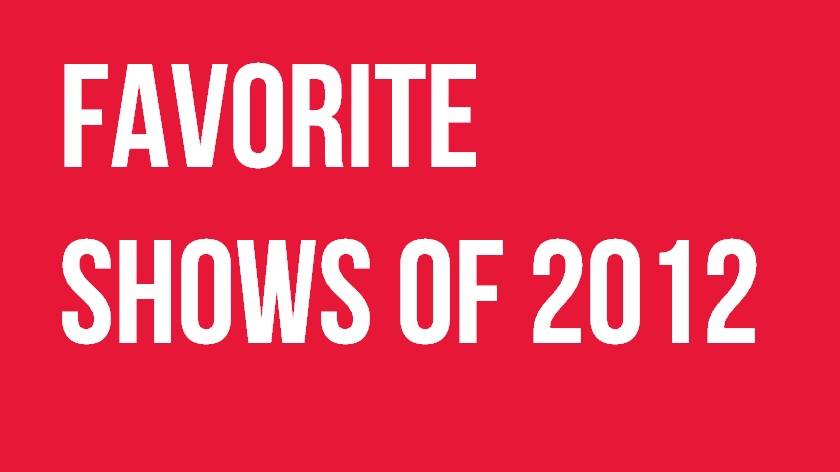 (Be sure to check out the TV in 2012 roundtable posts for more end-of-the-year goodness.)

With my busy schedule this year, I’ve been forced to watch a lot less television than I did in 2010 and 2011. At the same time, while my love for lists persists, I’ve grown to realize that there isn’t a lot of value in pretending any list of “bests” is more valuable than another. It’s all subjective; we like what we like. Thus, this is a list of favorites more than anything else, though I still considered “quality” (however you want to measure it). I was originally only going to do 10, then 20 and well, here we are at 40. Some things never change.

So here’s my list of 40, with a short thought about a chunk of them along the way.

I enjoy these shows well enough, but am too far behind to really count them here: Nashville, Parenthood, Go On, The Hour, Scandal, Last Resort and Arrow.

40. The Office: This show is no longer “good,” but it consistently delivers a moment or two that make me happy. The Jacksonville arc brought a little spark to the proceedings, and if we ignore everything related to Andy, the first part of the final season looks a lot better as well.

38. The Newsroom: While this one is wrought with issues, it also managed to pull a wonderful performance out of Olivia Munn and produced a slew of legitimately powerful scenes. Just pretend that the show exists in a unrealistic parallel reality and it seems so much better.

37. Doctor Who: I am a newer Who convert, so the tension between this version of the show and what came before doesn’t bother me as much as it does many folks. I understand that fans loved the Russell T. Davies years and I enjoyed many of those episodes I went back to in my catch-up. Nevertheless, Amy and Rory are “my” first companions so it more or less wrecked me to see them go this fall. The standalone movie storytelling approach worked sometimes (“The Power of Three,” “Asylum of the Daleks”) and didn’t others (“Dinosaurs on a Spaceship”), but in retrospect, there was more character focus in the fall episodes that I thought.

36. Once Upon a Time: I wish that this show was always as good as its season two premiere suggested it could be. Still though, I admire its ambition and willingness to play around in the giant sandbox Disney gives them.

34. Don’t Trust the B in Apt. 23: Better than I ever imagined it would be. Apt. 23 brings a biting and only somewhat-winking cruelty that never feels too harsh or out of place in the show’s universe. I’ll be really sad when ABC dumps this in the spring. 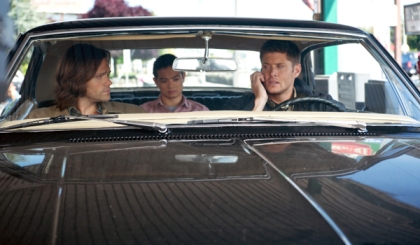 30. Supernatural: Probably the biggest comeback story of the year right here. With Sera Gamble gone and Jeremy Carver now at the helm, Supernatural‘s eighth season is more consistently entertaining but also re-aligned with the show’s previously important themes of family and the brothers’ personal ideologies on life.

28. Bent: That finale is one of my favorite episodes of 2012. NBC is so stupid sometimes.

27. 30 for 30: This slate of sports docs hasn’t, to this point at least, been as strong as the first batch, but I love having this series around. Broke successfully explored an extremely relevant issue facing sports today, while Benji and Ghosts of Ole Miss recontextualized important–and perhaps forgotten–events from years gone by. A must-watch for all sports fans.

25. Suburgatory: One of the more weirdly inconsistent shows on television, in that, when it’s on, few shows (not just comedies) are better. But then other weeks, Suburgatory retrenches back into the (admittedly still amusing) suburban cliches and stereotypes. There’s a strong core in-place here, and the writing staff knows how to build to emotionally powerful moments, but I wish the show could be at that level more regularly.

23. Glee: I liked the spring run more than most and the first half of season four managed to avoid completely imploding in the aftermath of graduation and big triumphs for the New Directions. Sometimes I hate how I much I like Ryan Murphy. 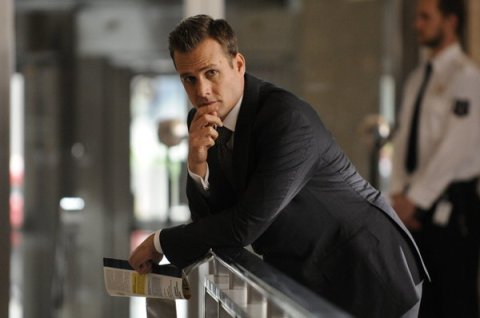 21. Suits: Definitely the most improved show of the year. USA Network shows tend to make big strides in second seasons and Suits is no different. It is nice to see creative teams embracing what their show does best and for Suits, that means moving away from any real pretenses of being a believable legal procedural and focusing on the entertaining workplace dramatics (outside of an occasional stupid cliffhanger). There’s great chemistry and energy among this cast; they are one of the more charming bunches on the air right now.

19. 30 Rock: Going out so strong. The Office should be a little ashamed. Okay, a lot ashamed.

18. American Horror Story: I mentioned this in our roundtable about the most surprising shows, but wow, American Horror Story turned it around. The narrative this year simultaneously figures more divergences, yet feels tighter and more coherent. The crazier it gets, the better.

17. The Walking Dead: Another show that took big steps forward this year. The 15 or 16 episodes of Walking Dead that aired in 2012 are the show’s best, excluding the pilot. The plotting is much improved, the characters are smarter and less annoyingly philosophical and it just feels like there is a purposefulness to what happens on-screen now. Which is why it’s so disappointing that Glen Mazzara is on his way out.

14. Community: It feels so long since we’ve spent any quality time with the Greendale Seven. The third season closed out on a very ambitious, though sometimes bumpy note. Nevertheless, the second half of Dan Harmon’s final season produced some strong episodes, thanks to an increased amount of serialization and weirder, yet more emotionally-complex storytelling.

13. Shameless: I’ve been happy to see other critics praising Shameless‘ second season, but also signaling out Jeremy Allen White’s performance as Lip. Although Emmy Rossum is and will always be tremendous as Fiona, White’s Lip drove so much of season two’s action and by the time the character broke down in the hospital after months of stress and crisis, I was an emotional wreck. Great storytelling and wonderful acting.

12. Awake: At this point, it’s a bad joke: Kyle Killen needs to go to cable. But hey, I’m happy we received all 13 episodes of Awake, a show that stumbled a little post-pilot by trying to serve too many masters, but ultimately turned into one that could tell interesting procedural stories and still deep emotional and psychological issues related to trauma at the same time.

11. The Good Wife: Yes, the Kalinda subplot in season four sucked. But almost everything else in the back half of season three and in the first portion of season four worked for me. Amanda Peet’s a delight (nice work again, NBC) in her recurring role and I’ve found myself turning into a Alicia-Peter supporter. I admire the show for exploring that kind of awkward yet very adult relationship with such vigor.

9. Homeland: The most over-analyzed show of the year, for whatever reason. Although season two featured a slew of weird choices and sometimes very sloppy storytelling, it also produced countless thrilling moments and extended sequences. “Q & A” and “The Choice” are proof that the show’s decision to tell this grand story in this smaller way can work and work very well. 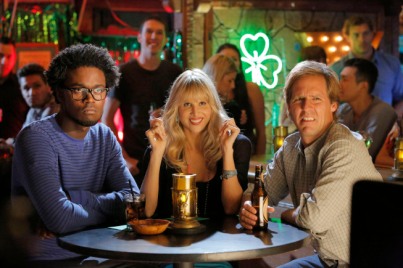 8. Ben and Kate: A big surprise for me this year. A warm, delightful and well-constructed freshman comedy.

7. New Girl: I’ve enjoyed New Girl pretty much from the beginning (cool guy here), but in 2012, the Fox comedy found its groove by dialing back on the Zooey of It All and allowing the rest of the ensemble do their respective things. And weirdly, this show manages to tell small little stories about contemporary barely-adult life really, really well.

6. Happy Endings: It’s not for everyone, but it’s absolutely for me. The only comedy I watch multiple times each week, just so I can laugh again and again.

5. Parks and Recreation: I don’t understand the “isn’t as good as it used to be!” rhetoric that arrived online this fall. The characters are a little more comfortable, sure. But there’s nothing like going through that initial growth with them, and the show can’t really be blamed for pushing them forward a bit slower now. The election arc produced a few misses here and there, but no show on the air combines heart and comedy like Parks and Recreation.

2. Mad Men: This was a more experimental season of Mad Men and most of the experiments paid off. Although people like to say that “nothing happens” on Mad Men, I’m immediately thinking of a slew of stand-out moments that will stay with me for a long time: Pete’s fight with Lane, Lane’s death, Don and Megan’s argument at HoJo’s, “Zou Bisou,” Fat Betty, ” Peggy’s departure, Don’s speech to Dow Chemical, all of “Signal 30,” really, I could go on for a long time. Mad Men is the richest–and often, the most interesting–show we have right now.

1. Breaking Bad: From my TV.com blurb about the show on the “top shows” list: “No show on television builds and releases tensions like Breaking Bad; in this run alone, the show killed an innocent kid, disposed of a major character, and turned the lead into a full-blown villain, all while somehow constantly showing off how fun meth-cooking and inmate-killing montages can be, before concluding with Hank having both a bowel movement and an Aha Moment on the toilet. Not bad for eight episodes.”