Skip to content
Cory Barker Episode Reviews, The Pacific May 21, 2010 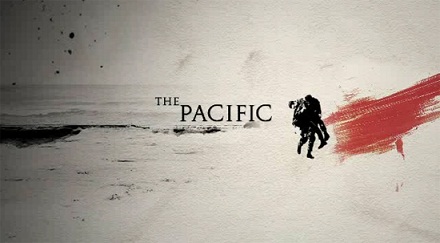 Last night as I was determining what Tuesday series to watch before Fringe, it hit me that I hadn’t even watched Sunday’s final installment of The Pacific. And it’s really too bad that it took me this long to get to it, because “Part Ten” is damn close to being my favorite portion of the miniseries.Early last week, I wrote a post asking why The Pacific didn’t seem as popular or as respected as it should and Myles McNutt commented on how the divide between critics who had seen the whole miniseries all at once and fans who were watching one week at a time might be to blame. He also noted that there was a good chance “Part Ten” would make some of the less effective, earlier efforts feel better after the fact.

Unsurprisingly, Myles was basically correct. The final installment saw the characters finally return home and the ability to see the complete story and the before/after was particularly effective for both Leckie and Sledge. And while Sledge has been at the foreground of many of the latter episodes, Leckie has been much more absent. I noted last week that his character didn’t go on as dramatic as a journey as the other two characters, but again, that was surely the purpose.

It was compelling to see Leckie at home and be reminded of that first episode and how I more or less forgot his homeland persona that was much more upbeat and even a little bit cocky. That clearly contrasts with what we saw from Leckie during his time in the war, as he was slowly broken down by not only the warfare itself, but the elements and the terrors of boredom. By the time we last saw Leckie, he was completely drained of any energy or life and in the end, I now see that his story was there to show us that sometimes what messes up the psyche most isn’t actually the battling or the killing — it’s everything else.

And so once Leckie gets away from those elements and away from that culture, he’s much better off (especially compared to Sledge). It seems like the mechanizations of war didn’t bother him as much and back at home, he’s not as haunted. Instead, the hop in his step returns, so much so that he’s able to walk right in to the paper and get his old job back AND convince Vera that it’s time the two of them go out on a date.

For Sledge and Shelton as well, things aren’t as easy. The marines that had to survive the horrible conditions and battles at Okinawa couldn’t regain that hop in their step so quickly. Those experiences seemingly brought them much closer together than Leckie and his fellow crews and that’s clearly apparent in both Sledge and Shelton. My favorite moment of the finale occurred when Shelton was leaving the train to finally go home and he can’t say goodbye to Sledge because he’s asleep. As he leaves, Shelton pauses for just one moment and considers waking up the guy he’s went through hell and back with, but decides to leave it be. And after all the two went through, that’s how they leave things. Like a thud.

Speaking of the thud, “Part Ten” also did a wonderful job of showing how the Pacific theater soldiers were almost forgotten by the time they arrived home. They were definitely respected and revered, but by the time Sledge and Shelton made it back, it had been a long time. That’s an interesting parallel to the sequences much earlier in the series when Leckie and company were heroes known the world around. Even back then, once the war went longer, people began to lose interest.

Not surprisingly, Sledge had the hardest time coping with his new elements. He wanted to join the fight so bad that it eventually consumed him completely, something we saw in “Part Seven” and “Part Nine” particularly. He doesn’t care about finding a woman or finding a job, and when he tries to think about college, a smart-ass co-ed grills him about not learning anything during his service time. He coldly tells her the only thing he learned how to do is kill Japs and that he’s pretty damn good at it. But in the end, Sledge can’t even going hunting or hold a gun because his experiences have scarred him so much. His story has had the most obvious through-line since the beginning. To follow him from that young boy with a heart problem to the detached, damaged man he is as the series ends was a real, emotionally-grueling treat.

And in the end, I think that’s what we should remember about The Pacific. It wasn’t always easy to enjoy and was sometimes even difficult to watch. It was emotionally draining on multiple levels and certainly less celebratory than Band of Brothers — and I think that’s the point. That’s how the people in the Pacific theater felt in compared to those who fought in Europe, so it’s only fitting that the viewing experience mirrors said contrast, if only on a much, much smaller scale. I hope people found the conclusion satisfying because it did indeed make earlier episodes feel more hefty.