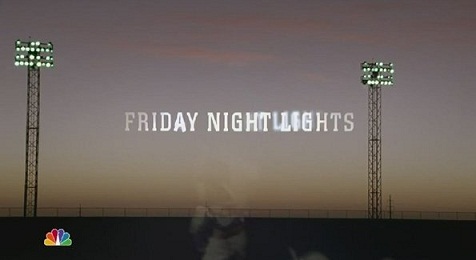 With Matt gone from Dillon, “In The Bag” felt like somewhat of a transition episode, as the series finely moves away from the original lead Panthers and towards the story of the East Dillon Lions. Of course, Tim is still around and we’ve spent a lot of time with East Dillon all season, but the first six episodes did a lot to build up and conclude the story for Matt and Julie. Here, she deals with the aftermath of his decision to leave while Tim struggles with his abandonment issues.

With Matt gone, “In The Bag” is very much Julie Taylor’s show. She’s on the verge of tears throughout and I loved the scene where she signs up for every school club while Landry humorously questions her intent. This is the type of scene that FNL nails so damn well. It’s small and ultimately not that crucial to the plot of the episode, but it balances the humor and heart perfectly and nails the relationship between Landry and Julie as well. And while I’m not sure I fully believe that Matt wouldn’t at least call Julie if he’s calling other people, I’ll go with it because Aimee Teegarden sold the frustration, confusion and despair so well.

Meanwhile, when Becky’s deadbeat dad visits, Tim takes it upon himself to make sure his neighbor is treated right. He finds out that the father not only doesn’t plan on staying long or ever coming back to Dillon for his daughter, but he also has another, new family in Seattle. And although Riggins tries not to say a word, his own past starts creeping in and he lets Becky in on the secret. This isn’t Riggins trying to look good or be the hero, he’s just remembering how terrible he was treated by his father. He knows how the game works. First it’s a dog, then a car, then whatever — it’s all just a way to keep the child from feeling awkward around the deadbeat parent. This was a welcome story for Tim in my opinion, because although it is great to have him around, his aimlessness has equated to nothing to really do within individual episodes, so with one former Panther out of town, it looks like the focus is turning to another.

Meanwhile, both Taylors see initially good situations turn sour, albeit on different levels. For Coach, the team is on a little bit of a high once Vince is given the QB1 role. And then Vince’s locker is searched because of a possible gun. Bummer. Coach does his best in a sticky situation, trying to ask Vince about the possibility of having a gun without making his best player feel like a criminal. Vince thinks it’s still just all about the football, but after a conversation with his player’s mother, Coach lets Vince know that his interest goes past the game. He needs Vince to avoid juvenile detention not just for the Lions, but for his trying-to-recover mother. This is another instance of racial issues popping up that never seemed to exist in Dillon before, but both actors sold it well and I know many people are happy that these stories from the book are finally being given their due in the television product.

For Tami, her work at the school leads to a major academic award, which allows Glen to convince her and all the other staff members it’s time to celebrate. After trying to get everyone fairly drunk, Glen makes the mistake we’ve been waiting for him to make for years: he tries to kiss Tami. It seems out of nowhere, but hey, Glen!