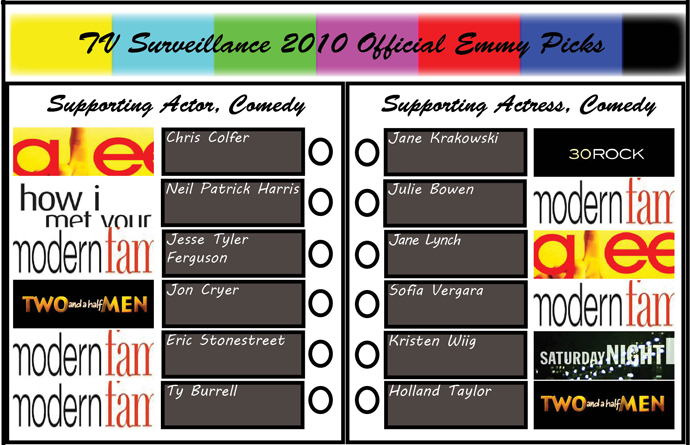 We’re in to the performance categories today, starting with Supporting Actor and Actress in a Comedy Series.

These two categories were inordinately packed heading into the nominations, and while there are some major wins (Chris Colfer!), there are still some veterans hanging on that surely don’t deserve to (Jon Cryer, Holland Taylor). Let’s just hope the new blood picks up the trophies on Sunday as well.

What won’t happen: This is a monster category where I do honestly think every one of the six performers could take home the award, depending on how the voters are feeling. Cryer won last year when NPH definitely should have, and both of them are backing fighting off four newcomers. The Modern Family trio could see their votes split, but of them all, Jesse Tyler Ferguson is the least likely to win and probably the least likely of them all.

What could happen: As I said, anyone could take this, especially the five other than Ferguson. If the Emmy voters decide to be lazy and idiotic, Cryer takes this award again. It’s not like he did worse work this season than he did in 2008-09. NPH is always awesome, but doesn’t deserve it as much for his work in season five — which probably means he’ll win. And if the voters are swept up in the Glee hysteria, Chris Colfer might just surprise us all, even if his performance is far from “funny.”

What should happen: I can’t even make up my mind for a personal opinion. Eric Stonestreet has a very, very strong episode in “Fizbo” and was actually given funnier things to do than Ty Burrell as the season progressed. However, Ty Burrell had all the buzz before the pilot and was fantastic there. We can’t expect the voters to actually have watched the full season, so it’s just as logical that they’ll see the pilot, remember all that buzz about Burrell and hand him the award. Of course, I love NPH and especially love Colfer, but I think it has to be one of the Modern Family guys. My personal pick would probably be Burrell, but…

What will happen: …I think Eric Stonestreet actually walks out of the ceremony with the award. I’m expecting Modern Family to do very well overall and despite Burrell’s buzz, I think “Fizbo” is too great to ignore.

What won’t happen: This is the easiest category of the lot, where no one really has a shot against the obvious front-runner, or so I hope. I’m not even sure why Holland Taylor made it back on the nominee list after a year off, but hopefully, amid this crowd, she’s far in the back. Unless this is another situation like the one with Cryer, where the category is loaded with other, great performances and the worst person wins. But still, I don’t think so. Same goes for Kristin Wiig, who really didn’t deserve her nomination either and thus, could randomly win using horrible Emmy voter logic. Jane Krakowski should face a similar fate, even though her performance this season was less annoying than in past ones.

What could happen: Not to sound like a broken record, but if Modern Family just sweeps it all, Sofia Vergara or Julie Bowen could take this category. However, even if Modern Family does sweep all the other categories, it’s not touching this one. But if it did happen, Vergara would be the obvious Family choice.

What should happen: Jane Lynch has had this award wrapped up for nearly year, and even though she submitted “The Power of Madonna” to rely on the musical performance (a Glee-wide strategy) instead of a more emotionally resonant episode, I can’t imagine it will matter whatsoever. Though her Sue Sylvester was grating at times, that was not Lynch’s fault. For the most part, Sue stood out as the only part of the series that was actually, you know, funny.

What will happen: Lynch. Duh.

One thought on “2010 Emmy Predictions: Supporting Actor and Actress in a Comedy Series”