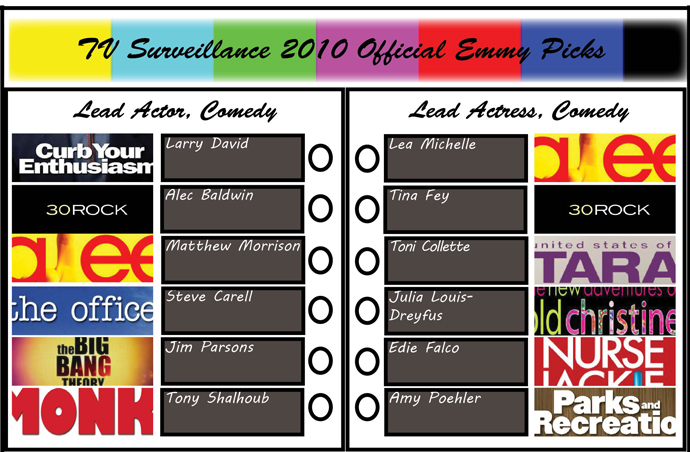 Into the lead categories now, as we tackle the fickle Lead Actor and Lead Actress in a Comedy Series categories.

What won’t happen: This looks like a stacked category on paper, but there are not actually too many of these fellas that have a chance of winning the award (Obviously, only one wins, but you know what I mean). In fact, two of the bigger names here, Larry David and Steve Carell, don’t have much of a shot in winning. It’s a shame that neither performer has won this award before, but this year won’t bring any change to that. David had some buzz for the most recent and Seinfeld-centric season of Curb, but it finished almost a year ago, so I don’t think the voters are going to remember that far back (cut them some slack, they’re old). Carell is always a threat, but coming off a weak and buzz-less season of The Office and having a final year on the series coming up, he’s a nearly a sure-fire winner for 2011. But this year, I don’t think so.

What could happen: With those two out of the picture, any of the other four gentleman has a shot at winning this thing. Matthew Morrison is definitely the least deserving of the four (and the six, and the other people whose spot he stole like Joel McHale or Adam Scott), but if that much-discussed Glee wave catches on and the voters are charmed by his glorious rapping abilities, he just might win. And we just might have to burn down the theater. Alec Baldwin is a repeat winner looking for three in a row, and there’s also really no reason why the voters wouldn’t pick him again. He was fine this year, but Alec Baldwin fine is still damn good.

What should happen: I’ve gone record with my ambivalence towards The Big Bang Theory, but Jim Parsons is awesome as Sheldon and the only reason I occasionally tune in to the CBS megahit. With Carell on a down year and Baldwin hangover, I think it’s time to pass the torch a little bit. He was nominated last year and unofficially “paid his dues,” so let’s just give it to him.

What will happen: Unfortunately, it looks like we’re headed towards another victory for Tony Shaloub. The Monk stars victories in 2003, 2005 and 2006 were frustrating and one of the reasons I hate the Emmys, but for various reasons, I’m more okay with his swan song victory that’s to come this Sunday. He was very good in the final, two-hour episode that finally resolved the series’ mystery, and really was always good, even if we did hate that he beat out “edgier” performers. After this he’ll be gone, so we can all move on, at least.

What won’t happen: At first glance, this category looks wide open as well, but I’m not so sure. The only thing I am sure about depresses me the most: Amy Poehler will not win. She’s a past nominee for her work on SNL, so it’s obvious the voters like her, but not enough to overcome the perception that Parks and Recreation isn’t any good and not enough to overcome her counterparts with meatier material. Sad-face.

What could happen: Aside from Poehler, I can concoct situations where any of these fine ladies end the night a winner. Julia Louis-Dreyfus could easily grab the award as a goodbye for her fine work on canceled CBS sitcom, especially considering she’s a former winner. And like Matthew Morrison (and probably even more possible) Lea Michelle could surprise if Glee destroys multiple categories. Tina Fey is always a major threat, like Louis-Dreyfus she’s a former winner and an Emmy favorite. Her submitted episode is always hilarious, so I would be far from shocked if she wins either.

What should happen: Poehler!

What will happen: Of course, even those this is the “Comedy” category, it’s going to come down to two performances that are more dramatic than comedic, as the Showtime ladies Edie Falco and Toni Collette will face-off for the victory. Collette deservedly won last year and didn’t do anything to be knocked off her pedestal — playing multiple characters will do that for you. However, Falco is a three-time winner and multiple-nominee for her work on The Sopranos and is able to submit the pilot episode of Nurse Jackie. I’ve assumed she’d have this award in the bag since the series premiered, and there’s no reason to change my mind now.