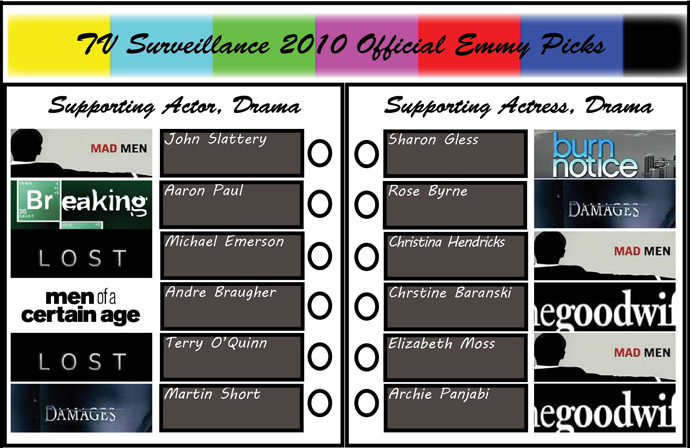 Today we finish off the supporting categories with Supporting Actor and Actress in a Drama Series. Let’s do it.

Both of these categories are super difficult to choose, but for completely different reasons. Of all the categories, these are the two I feel the least confident in picking an actual winner. But for you, I’ll try.

What won’t happen: Man, this is so tough. Literally every one of these actors has a good chance of walking away with the award; this is the most stacked category of the night. Of the six nominees, three have taken home an Emmy for their performance (Martin Short won a writing award years ago for SCTV): Emerson, Braugher and O’Quinn and we know the voters love former winners. Aaron Paul might seem like the odd man out, but he’s been nominated two years in a row and the voters are obviously paying attention to Breaking Bad performances. Thus, I think the two people who have the least possible chance to win are Short, whose performance isn’t as good as advertised, and Slattery. But again, I’d be far from shocked if either actually did win.

What could happen: Though Andre Braugher was probably the sixth nominee, he could very, very easily be the winner for his great, but overlooked performance on Men of a Certain Age. He’s not a showy actor, but has been awarded with Emmys twice (Homicide, Thief) and nominated multiple times. The Emmy voters clearly love him. But we can’t forget the two Lost actors, who bookended Željko Ivanek’s 2008 victory with wins in 2007 (O’Quinn) and 2009 (Emerson). I love them both, but I’m not sure Emerson had enough to do to warrant the award, no matter how great “Dr. Linus” is on its own and O’Quinn didn’t really re-invent the wheel with his dual performances. But, they’re both former winners, so never, ever rule it out.

What should happen: Aaron Paul handed in the best individual performance of any single actor this past season. His work on Breaking Bad is intense, subtle, exciting, emotional and really any other great adjective I could think of off the top of my head. If you think that sounds hyperbolic, watch the series and tell me different.

What will happen: Like I said, I’m still honestly unsure of my choice, but I do think it comes down to Paul, Braugher and O’Quinn. Paul will be back, so let’s unfortunately get rid of him. Between Braugher and O’Quinn, I’d probably pick Braugher, which means O’Quinn is going to win. Lost is going away and he’s the series best chance to grab a major award. I think he does.

What won’t happen: Ew. Unlike the actor side of things, the problem with picking a winner here is that there none of these performances bowled me over during the season. Don’t get me wrong, these are all capable ladies, and in some cases (Gless, Baranski) the series did them wrong or they submitted oddly (Byrne, Panjabi). Of the six, Byrne is the least likely to win both because she submitted oddly and isn’t as good as the other five women around her, no offense. I’m going to go ahead and rule out Panjabi as well, who was a surprise nominee, but would be an even bigger surprise winner.

What could happen: Either of the Mad Men ladies could finally help the series break its odd streak of not winning anything for performances. Moss was nominated as a lead last year and again here this year, so the voters certainly like her. The question is whether or not they love her, especially in a relatively light year for her. Christina Hendricks submitted well and is more deserving of the two. Baranski plays one of the lesser characters on The Good Wife, but she’s a veteran nominee/winner who could easily win just because the voters see her name on the ballot.

What should happen: I’m not a major Good Wife fan, so I wont’ even pretend to say either of those ladies should win and instead will go with Hendricks, whose performance is often overlooked when people are too busy discussing…other things about her.